USBM entity HUMUT TABAL is gearing up for a West Coast tour that is planned to launch December 26 in Lubbock, TX (venue TBA). Dubbed “Return from the Astral Plane: West Coast Tour 2014/2015,” the jaunt will include dates in the band’s home state of Texas, as well as Arizona, Nevada, California, Colorado, Utah, Idaho, Oregon, and Washington during the months of December and January. The improvisational and Aleatory-inspired Black Metal band is touring in support of this year’s release of The Dark Emperor ov the Shadow Realm.

The Dark Emperor ov the Shadow Realm is an 8-track concept album that tells the tale of a misanthrope in a post-apocalyptic wasteland who experiments with established occult practices before looking solely inward and transcending the physical and spiritual bonds of the world and of human preconception.Warning: The new album pushes boundaries and short circuits neurons. 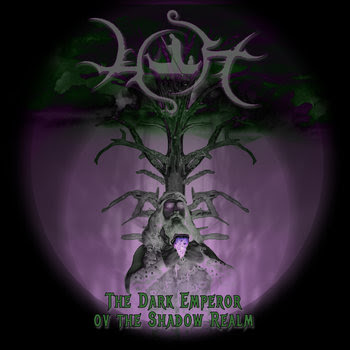 1. Across The Boundless Land Ov Death

2. Through The Forest and Twisting Shadow

“So let your body be taken in, your mind overcome, this is where trve metal warriors find redemption, in the occult and fantastic worlds crafted by Texas’s best black metal group.”

“Humut Tabal play frigid Black Metal with dark melodies lashing out from every angle. The riffs are catchy and purposeful and the songs are driven by a sense of urgency and grandeur.” – Wonderbox Metal

HUMUT TABAL plays a style of black metal heavily influenced (but not exclusively) by the Scandinavian black metal groups of the 80s, 90s, and 2000s, such AS EMPEROR, MAYHEM, SATYRICON, and DISSECTION, as well as by the improvisational, serial and aleatoric approaches of other musicians of the jazz, classical and progressive styles. These include but are not limited to: JOHN COLTRANE, MILES DAVIS, KENNY CLARKE, BRUBECK, STOCKHAUSEN, BELLA BARTOK, SCHOENBERG, PALESTRINA, BRAHMS, PHILLIP GLASS, WAGNER, IGOR STRAVINSKY, BILL EVANS, TYNER, MEDESKI, MARTIN & WOOD, TONY WILLIAMS LIFETIME, FRANK ZAPPA, and the GRATEFUL DEAD, among others. These influences bring a more technical, spatial, experimental and improvisational approach to HUMUT TABAL’s black metal base.

HUMUT TABAL employs Chaos and Order freely: Counterpoint and Aleatoric devices coexist in the Unity of the Way of Sound.

#####
We run magazine with no ads. If you really would like to support Antichrist, you can just Share our article.
You can also support Antichrist by sending a couple bucks to cover some webhosting expenses.
www.facebook.com/humuttabal
Comments