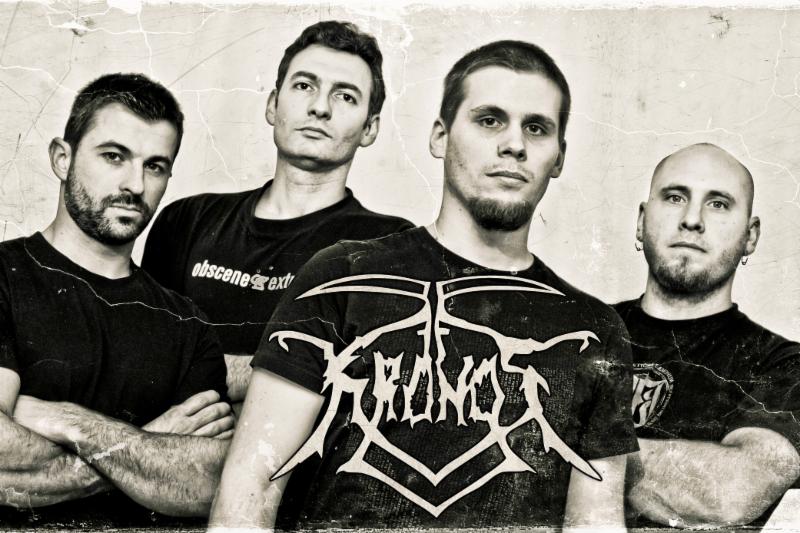 A Titan Who Ruled The Universe, Dethroned By His Son, Zeus… Is Ready To Rise Again!

“We are very proud to announce the multi album signing France’s KRONOS. The band has been an influence on many acts over their extensive career and continue to push the envelope in the genre with their aggressive form of extreme metal madness.”

“KRONOS is beyond stoked and proud to join Unique Leader Records… the perfect fit for the Titan’s awakening! Unique Leader Records is one of the best extreme metal labels and has many talented bands from the brutal/technical death metal scene on its roster. We’re absolutely pleased to be part of the UL family and eager to release our forthcoming new album very soon. Expect some real fury… the Titan is back!”

A name derived from the Greek god of time, Cronos, father of Zeus, KRONOS was forged over fifteen years ago and quickly established a name for themselves based solely on their musical unity of harmony and violence. Featuring a continuous textual reference to the gods of ancient civilizations, KRONOS punctures ears with a heightened level of dynamics accomplished by only by a select number of bands. It all began in a small town in the Northeastern province of Alsace-Lorraine. Following various lineup shifts and musical experimentation, the pandemonium squad recorded their first demo in 2000. One year later, KRONOS would unleash their Titan’s Awakening debut. Produced entirely by the band, the lethal creation lead to a union with French imprint Warpath Records (formerly known as Shockwave). By the end of 2001, Titan’s Awakening was expelled once again into the world, this time with a brand new cover designed by Deather (Gurkkhas, Vital Remains, Angel Corpse) as well as a visually disquieting booklet.

KRONOS later joined forces with Spanish label Xtreem Music run by Avulsed’s Dave Rotten, for the unleashing of their next two full-lengths. Second offering, Colossal Titan Strife was discharged in 2004 to the applause of underground critics in the proverbial know. Metal Crypt commended the band’s, “diversified guitar work… intricate drum patterns… wicked guitar solos and.. good number of catchy yet non-compromising hooks,” further insisting, “This French outfit is definitely worth checking out,” while Sputnik Music championed, “an impressive album that shows off the capabilities of death metal done right. KRONOS managed to pack a metric ton of creativity into each song and you will barely hear the same riff twice.” Added Last Rites simply, “worth your time if you… need some solid, well-produced death metal.” Third offspring, The Hellenic Terror, emerged in April 2007 and served as an attestation of the band’s enormous capacity for skilled execution and originality. Said Metal Crypt in a near perfect review of the release, “The Hellenic Terror contains more melodic sections than Colossal Titan Strife, but still possesses almost as much brutality…. KRONOS is one of the few death metal bands that manage to be melodic, brutal and still remain catchy as hell in their riffs and solos. This is definitely a must-have for fans of death metal.” Now that this Gallic Titan has blossomed into a powerful entity, they’re ready to vanquish and destroy the world with musical bloodlust and a new album to be released via Unique Leader Records this Summer. Further details to be unveiled in the coming weeks.