Hi! we are UNSAFE, we are located at Limoges in France

The style of the band is close to thrash/death metal with female guttural vocals.

We try to make catchy and powerful songs with some melodic guitar riffs.

Most of the lyrics talk about the negative aspects of humanity: greed, stupidity, destruction, hatred… and the fact that things can change if you want them to change. There’s hope with people that try to think differently and try to live their life in a different way.

We just want to play music, to compose tracks and whish more people could have a listen to our albums.

Around a hundred (in France) since the creation of the band, which is not so much. We wish we could find more concerts but it’s very difficult to find, there’s so many bands, not enough places to play and not enough public comming to see gigs.

The main thing to say about the band is that Lionel & I (Stephanie) have been playing music together since 1994 (Lionel had already played in a heavy metal band before). We had very difficult moments as we had to change musicians many times. But we never stopped even when we had to change all the crew !! It was very difficult for us to succeed in finding the good persons, we’re lost in a little town in the middle of France and there’s not a lot of good musicians feeling involved in music projects. To make the project goes on, I had to succeed in composing most tracks of the albums alone, with the guitars, bass, drums (with computer) and the vocals, Lionel completed with some tracks and guitar solos. We are making everything by ourselves : video clips, recording (except for mix & mastering), cd booklets, band promotion…
Since summer 2014, we have found a very good team ! 3 new musicians : bass (Mathieu) , guitar (Niko) , drums (Xavier).

I think that we’ll still release some CDs as we still buy bands CDs, Lionel has a hudge collection of metal, heavy metal Vinyls & CDs. Even if we realise that less people buy cds, we are not fans of MP3… we prefer physical releases with a good sound and a cover artwork.

I thought that the label’s part of work was the promotion as the band should concentrate more on the composition of the tracks and concerts, but I see that the band still must do this part of job. But people should know that a band like ours can’t leave only with it’s music, we earn nothing, it just costs us a lot ! so we have a job and our week is not long enough for : work, rehearsals, track composition, booking, concerts, band promotion…

We’re used to negative opinions as we live in a country not really open to metal music… Our favorite one is : “the music could be great but the voccals are so weird !!! it’s too musch agressive !!” It’s funny to see that we have now one of the biggest Metal festival (Hellfest) and that metal has no diffusion on mass medias (general radios, even for teenagers, TV…). Most of french people is not interested in metal and still have a negative opinion about it (=> weird people listening to satanic music !! 🙂 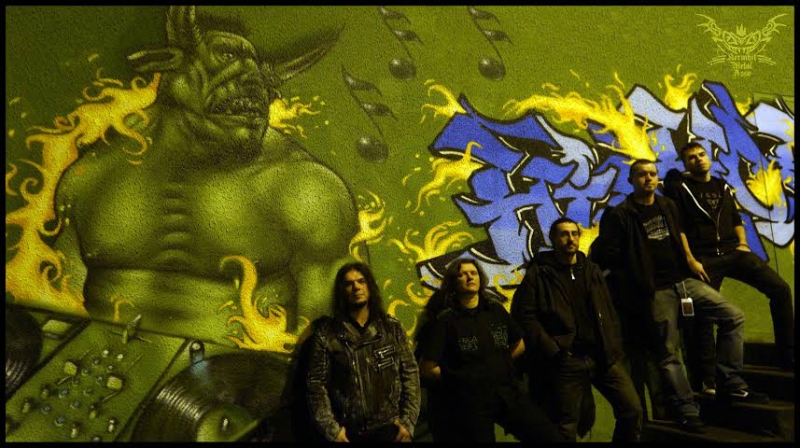