Colombians Guerra Total  knows how to please the horror fans. Their new album ‘Nihilistic Malthusian Manifesto (The Ouroboros Cosmic Indifferentism)‘, full of aggression and misanthropy, was released in February 17 by Iron, Blood and Death Corporation label. So, brutal ladies and gentlemen, please welcome this 43-minutes blasting mix of thrash and nihilism.

‘Nihilistic Malthusian Manifesto (The Ouroboros Cosmic Indifferentism)’ includes 11 evil tracks, which poison you from the first listening. Their aggression cling to the soul like anthrax, and then goes possession. Rhythm-section strangleholds your throat, super fast tremolos ripping the head off, and vocals are making the atmosphere of anarchy stronger; then comes an irresistible desire to rage and crush. True nature fighting with demons with destruction sounds, where keyboards and percussion can be heard. As for me, it’s quite non-standard for Black/Thrash, which adds a zest to an album. Melodic solos from Death Metal supplements this bloody manifest greatly.

Disgust, non-acceptance, aggression, animal instincts, thirst for punishment are oozes from each track. Screaming is a leech in your brain, it hearts the nerves and provokes for outrage.

Great work, where Colombians showed their potential and confirmed their level fully. 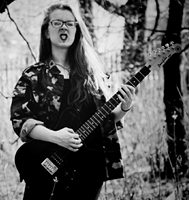