Greek black metal mavericks Thy Darkened Shade stream the entirety of their highly anticipated second album, Liber Lvcifer I: Khem Sedjet – out now on W.T.C. Productions – at Metal Hammer UK magazine’s website (click here). Bolder and brasher than the Greeks’ celebrated Eternvs Mos, Nex Ritvs debut, Liber Lvcifer I: Khem Sedjet is a sprawling and serpentine work, a daring and diabolical monument to the eternal light of esoteric illumination. At the core of Thy Darkened Shade‘s aesthetic is the band’s profound and intensely studied lyricism. As the serpents of Eden, they are both the shining and the shadows, and consequently know the illusions of good and evil since they originate from the source: Or She-ein Bo Mahshavah, the solitary true light. Thy Darkened Shade are those few who have the wisdom to overcome, the sovereignty to become something evolved, in the forms and likeness of their gods. Across Liber Lvcifer I: Khem Sedjet‘s 78-minute runtime, many names are hailed, amongst them – Satan, Loki, Typhon, Set, Ahriman, Lucifer, Prometheus, Kingu – and the band explore myriad routes toward that burning, searing illumination. But as labyrinthine as Liber Lvcifer I: Khem Sedjet is and its pathways at times beguiling and treacherous, here black metal music serves a greater purpose: the Promethean mantras lead Thy Darkened Shade and the blood of Qayin binds them towards acausal freedom. “We possess everything we need to destroy all illusions; we are the children of Lucifer –  we shine in grandeur and might.” Thus begins the age of Acausal Necrosophic Black Metal. Cover and tracklisting are as follows: 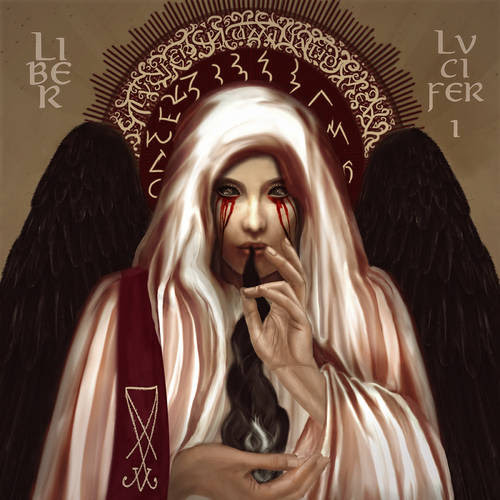