Do you like some war themes? If you do, then 1914 from Ukraine can tell you many interesting things by their music! And please note – 1914 does NOT supports ANY political etc movements, they only play good music and expressing their inner world! 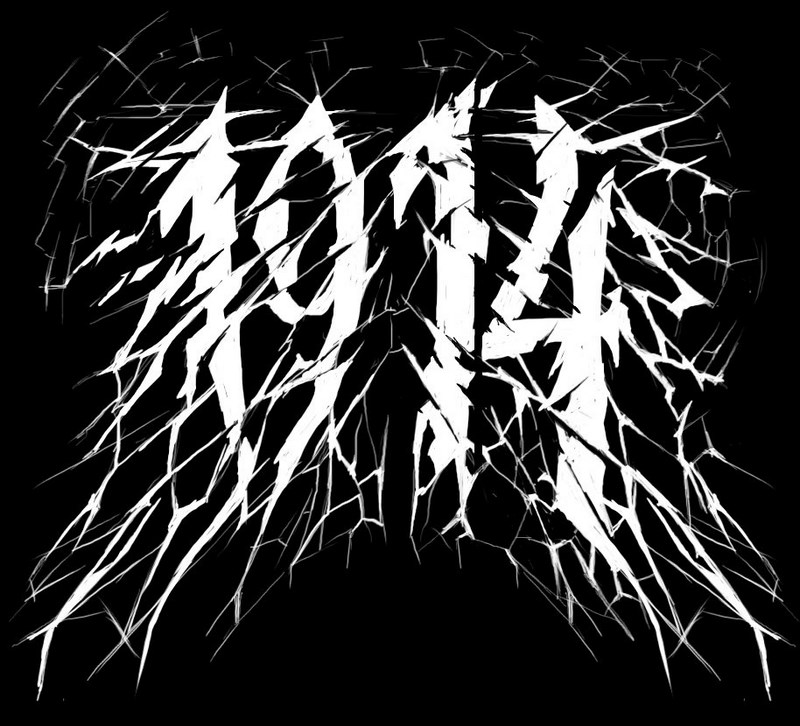 Hello 1914! Finally here is your time to be part of our magazine! I do not like such common questions like band history, but since 1914 are not so known band yet, I’ll do it; please tell us band’s history by couple sentences.
1914 is a young band, being playing for about 7 or 8 months so far. I mean playing together like a project, because all members of 1914 have a huge musical experience, we all played in a many bands, played a number of concerts, recorded albums etc…
Actually I gathered together members of known ukrainian bands like: Kroda, Skinhate, Ambivalence, Johny B Gut, Stalag 328, Zgard, Disentrail, Ratbite, Toster and a lot of other projects.

Your main theme is a war, correct? And thx this fact (as I have read your statement) 1914 often compared to some nsbm music, actually it’s not enough to have similar title for to be compared to such style… But why so hapens from your personal point of view? Is it just ex-ussr issue or you have got same opinions from abroad as well?
WW1 is the strangest war, the last war of gentlemen and knights, Great war as it was called. I have always been inspired by this theme, and often used it in my songs. It’s neither about politics, nor about propaganda or any right\left sided bullshit – it’s just war, trenches, fear, hopelessness and endless death around of you. But many idiots behind the monitor, when they see the old picture of dead soldiers (especially in german’ helmet))) think – oh, another good one NSBM stuff, and the right hand involuntarily goes up))). They don’t distinguish uniforms or any stuff of this period. So in one musical community some guys tag us like NSBM – and one morning we woke up as young and full of energy neonazis))))) But we don’t give a fuck about it – for us music is first of all.

And why you are so digging into war themes? What war means for you personally? And do you see there any positive things in wars at all?
No, I hate wars. I don’t understand why with such a short life people always wanted to kill each other. And our music is against the meaninglessness and absurdity of war. Why this theme is so close to me – I love this war. Strange to hear this from a man who just one second ago was talking about horrors of war))) but this is true – I love this war, this history, uniforms, weapons, armament, stories about the battles, the fate of soldiers. I am a really fan of Great war. Plus I am a war archeologist, many years searching and digging artifacts of this war, ammunition, dead soldiers. WW1 – this is the time when I would like to live, time where I died))

Ok, I have found such interesting thing, when I saw you playing live, your music sounds pretty different from the music I have heard in recorded way, why so? Are there different songs or…?
Yeah, we have a live fullset for a half of hour (10 songs), but we playing maybe 5 songs on the gigs at time, and we have recorded just 3. In fact, we recorded 6 song for album, but right now you can hear only 3 songs. Does our music sounds pretty different from the recorded music at gigs? Hmm how different? Maybe guitarist played something wrong?)))

As I know, this month 1914 planning to issue debut album! How many percents are ready as for today? Can you tell us detailed when it’ll be pushed into the masses and main thing – what we sould expect from the album? Do you have album title yet?
Yes, we recorded the debut album, but not yet finally named it. I think it will be called – Eschatology of war. At percentage it is ready.. hm.. maybe 75%. We planned to release it in April, but we moved the release date to the early summer. Right now we are looking for a label who will publish our stuff. But regardless of label’s CD or vinyl – I plan to release a limited edition (maybe 25 copies) with truly artifacts of WW1, which I dug up by myself. But let it be a surprise)) 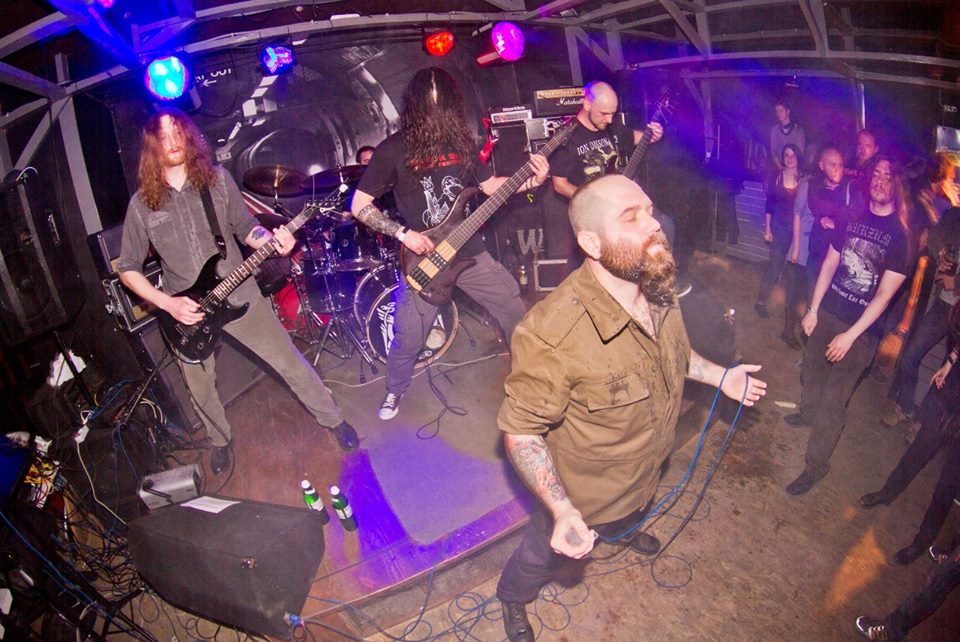 Did you ever played beyond your city? And, do you like play live at all?
It’s probably weird, but 1914 played just four concerts so far. And one beyond the city – in Uzhgorod. It’s because we were creating songs, recordings, looking for a style and sound. A few days ago we played with some BM bands – Khors, Besatt, Inferno. Our plans for this year are to release album and play as many gigs as we can.

How could you describe 1914’s music to be compared to some style? And what the music do you listen to?
Oh… difficult question. We do not have a common opinion about this))) Someone think that we play black metal, guitarist thinks that he plays post-metal and I used to call all this musical outrage – blackened doom with maybe some sludge influences. But over time we just slowed down and became monolithic and angrier. Less metal – more despair and pain. About music that I listen to – it will be a long list from Japanese noise to pornogrind, from true BM to old school rap, from hardcore punk to industrial, electronic, death, doom, sludge, stoner, post-rock and Manowar)))) Yeah I fucking love Manowar and all these brothers of metal in leather pants)))

Writing lyrics, who handle this important thing in your band? And where you take an inspiration; books, documentaries etc?
I write all the lyrics by myself. About death in trenches mud, gas attack, despair at battlefield and lonesome death at no man’s land. Inspiration? Films, books, memoirs, military items collecting. When you dig up a soldier in Carpathian mountains or in Volyn`s forest, who died here 100 years ago and laid in the mud, waiting the hours – it gives you inspiration. When you look at these bones which were human, with all human’s stuff – love, feeling, hope, maybe stamp collection, whose parents were waiting at home, you think – why? Why and for what he died. Silent, unburied, forgotten, a thousand miles from home. Nameless victim of war who died in the name of colored flags and bearded Kaisers. Yeah… it gives you inspiration.

What the feedback you receive from local metalheads? Are there people asking your CD or T-shirt etc? And, looking to the nowadays trends over the world, do you see future of physical releases at all? You know, some people say that CDs or Vinyls are just useless and wil be forgotten asap, do you believe in this bullshit?
Actually I was surprised by the fact that we get so much positive feedbacks. It helps a lot to do what we do. At gigs I am trying to tell something about Great War, some facts, what these songs are about, and I hope someday people will learn a little bit more about WW1, even if they’ll get that knowledge in such a strange way. About future of physical releases – this is history. And people love to collect history)) So it will not disappear, but will simply become another collectible stuff for oldfags)))

Continue WAR themes, from your point of view, all that happens here in Ukraine (russian invasion etc) – is it real or artificial war, and can we call it war? How do you see the end of this shit, if you see it of course?
I do not want to touch this theme here. But – there is war, invasion of fucking putin assholes with bear, balalaika and vodka. Typical Russian world. And people are dying, some of my friends died too. Fuck Russia, that’s all I think about it.

How could you describe Lviv’s metal scene? From your point of view, why the bands here working too slow with new songs, albums etc? You know what I mean, some really old bands have just 1-2 albums for over 20 years of existence etc (but luckily still alive, he-he).
Lviv metal what?)))) Lviv metal scene is like some kind of joke about elusive Joe – oh… is he really so elusive? No, nobody’s fucking chasing him)))
Slowly we rot – It`s about music in Lviv. Typical provincial swamp. I hope that we will play anywhere, but not here.

Returning to 1914. All band members noted like Captain, Sergeant and etc… How did you choosed these ranks?:) There is just one captain, others have less ranks, why so? Are they just “little soldiers” in the 1914 “legion”?:)
Actually all ranks and regiment are real. K Company 307th Infantry Regiment or C Company 306th Machine Gun Battalion – real historical divisions what took part in battles. I chose it randomly. But I`m the Captain))) I’ve decided that with time all members of the 1914 will grow up as in army. 10 concerts – ranks up))) And about the 1914 “Legion” – I hope it will rapidly grow up with new fans and the people who have interest about WW1 and this kind of music.

Ok, that’s all I wanted to ask right now, thx for your time and I hope I’ll listen to your album very soon! Now you can write some words to the readers worldwide! \m/
Study history. Those who do not remember their past are condemned to repeat it. Because war – war never changes.
https://www.facebook.com/1914band 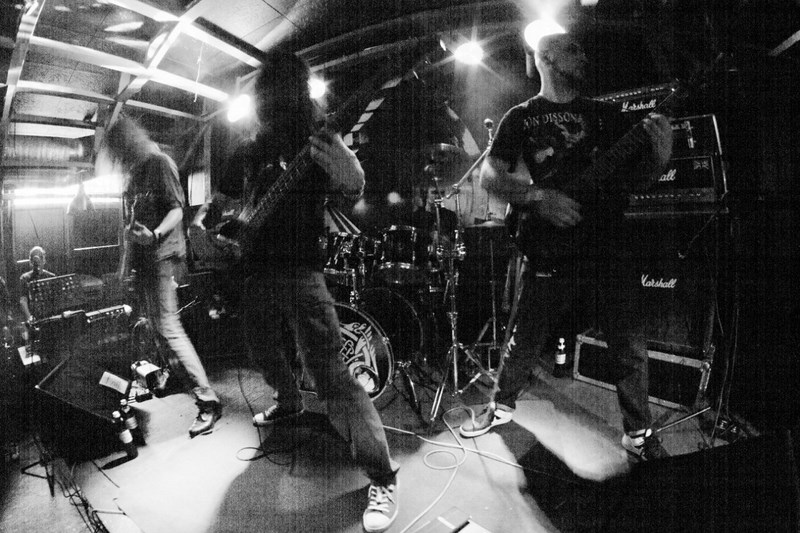