First of all I’d like to send HUGE thanks to the guys who have make this event true – i.e. to Konstantin from Khors and Oleksandr from Apostate – THANK YOU!!! Read brief report under the slide show!

Here I’ll tell you little about grand event that happens here in Ukraine, that event was grand for all the fans of old good Black metal (to headbang in front of KULTs like Inferno and Besatt on one stage was really hellish event here). There was a mini-tour of Ukrainian band Khors (their new album’ presentation). There were two cities – Lviv and Kyiv. The first one was in Lviv, there were played next bands: Massenhinrichtung from Belarus, 1914 and Apostate from Lviv both, then Khors, and, of course – Polish Besatt and Czech Inferno! If the rest of the bands we are able to watch here anytime, the last ones is a rare thing (moreover together). Well, I can’t tell you about the whole gig, because, due to the some technical reasons I have missed Massenhinrichtung and 1914 sets, so I’ll just tell you about what I saw personally, also you can enjoy the pictures above, which were made by my wife and magazine’ photographer.

Massenhinrichtung – black metal band from Belarus, their music is interesting, but I have never saw them alive, so I’m just unable to tell how they sounds on the stage. Just to inform you all – if you interested to listen to their music, their latest stuff was released recently on Darker Than Black records (CD format).

1914 – first time I saw them live last year, and their music has been shocking for me a bit, they plays really awesome music, sludgy doom metal music with war oriented lyrics and some black metal touches, both music and performance were on the top level! This time they played some new stuff, unluckily I have missed it, but I’ll be able to check them here again near time. They haven’t any albums released yet, but they have finished the work with the new stuff, so hopefully it’ll see the light ASAP this year!

Apostate – my gig was started with this band. Apostate is an old Ukrainian doom/death metal band, sounds in old-school way, and as doom metal gigs aren’t some often events as well, that was really interesting, full of pressing depression and just awesome walls of sounds, by  both slow and mid parts… With a low tuned guitars and typical doom metal atmosphere, which had reminded me something from old My Dying Bride and American Rigor Sardonicous (by slow parts). Their CD was released recently as well, by Ferrrum.com records, so if you like doom/death metal – be hurry to grab your own copy until it’ll be sold out. But if you want to read our review of their last effort, just click here. 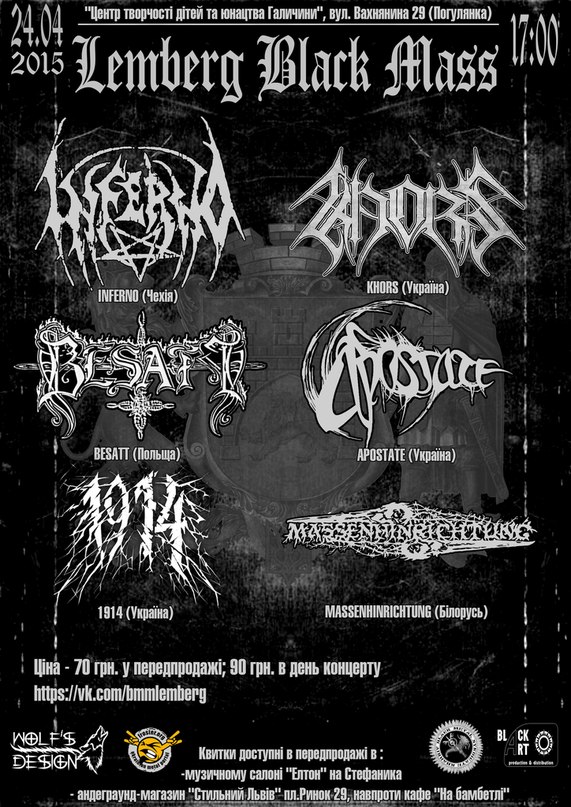 Khors – one of famous Ukrainian bands, into Pagan Black metal. Musicians behind this band are enough skilled and have numerous of gigs, so their performance was clear, professional and just perfect. I’m sure many of you have heard their music and maybe even seen them on gigs. I have missed several songs, but I can say it was played worth. The most killer was performance of the song called “My Cossack Way”, and looks like this song was like a blow for almost all of fans there. Feel free to check out review of their last album here.

And, finally! The start of pure Black Metal holocaust!

Cult Satanic killing-machine from Poland – Besatt on the stage! Typical grim look and hellish warfare! I know, needless to tell you how they looks on the stage like, and how intensively they killing ears and minds. Just a pure, as it should to be, hurricane Black metal massacre, without any even signs of poser like modern shitsounds etc, true and evil metal of darkness! My neck was crushed while their performance, and my voice just disappeared, hehe! Unbelieveable forces of darkness!

Next cult – Inferno! The same spilling the blood of god suckers! Atmospheric but straight-forward at the same time black metal, with known meditative approach, the show looks awesome, known to the bone songs, rhythms and atmosphere, crushing rhythms of hell and fucking freezing sound. The only negative thing was Inferno’s playing time… Previous beasts just spilled some pig’s blood on the stage, so the club’ owners were a bit (maybe not a bit, I do not know) angry… As for club’ time – the gig should been finished, but as for fans – it was sad…

So was the unbelieveable evening here, FULL of fans club, there were crowded, hot… BUT fucking crazy! You may not believe, when there was even mosh, hehe, so people front of stage were just attacked from the backs, but, it was not a huge problem). Also I have found lack of space at all… I saw how many fans entering the club, but seeing they will not have a space there – they just out of there… Another positive thing – there was a bar, so you could headbang, then have a little rest with the glass of beer=)

Next day was a hellish drinking party, and then musicians moved into the Kyiv, we weren’t, so I can say nothing about gig in Kyiv, I only know from some pals of mine there was the same hot and crazy, with lots of people and etc.

And there is yet one negative thing… I was shocked when some people wrote on the event pages something like “our Ukrainian bands are the best, in thousands times better than “those foreign ones””… Sounds pretty ridiculous and completely incompetently… I can’t even comment this shit…

Ok, the main thing gig was great and maybe Besatt vs Inferno will spread evil HERE again! And of course, one more time, thanks as hell for those who has make this event – i.e. Konstantin of Khors and Oleksandr of Apostate! And of course thx to all the bands who have played there! \m/

See you in hell! (c) Aleksandr