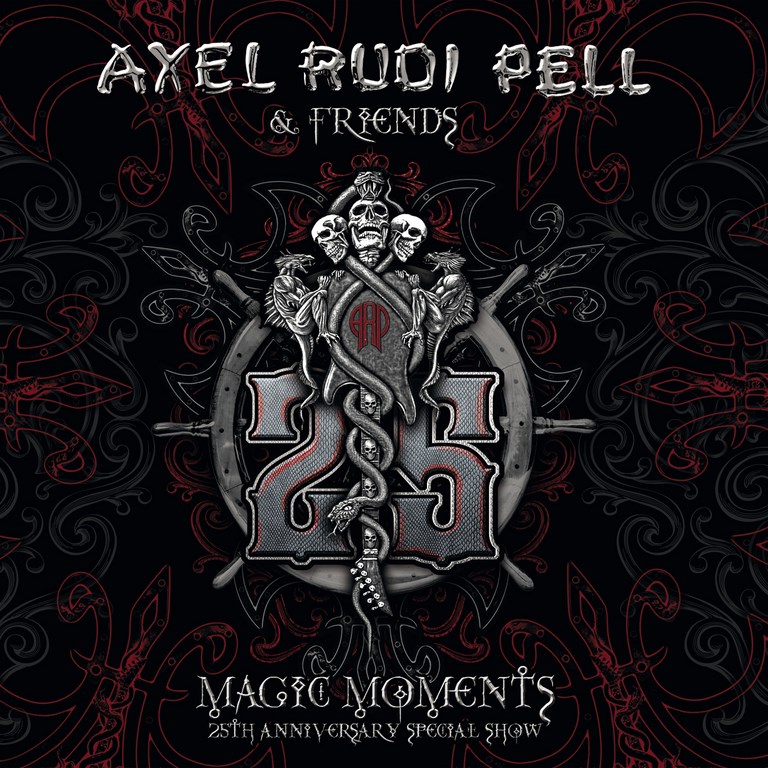 As you could notice, this is not new album, but this is pretty unique thing as for me. This show was recorded Bang Your Head festival in Germany last year, and it was really amazing night, I wasn’t there, but listened to this stuff I have got an idea it was more than awesome! First of all because I’m a big fan of Axel Rudi Pell for many years already, since far ‘90s, when I got some piracy Cassete with something like “personal compilation” from some piracy label (you know, those time was almost impossible to get some original stuff, so, here, on the ex-ussr area was real madness, hehe). Well, as for this release, actually it loks like 3 CD DigiPack, 3 DVD and 1 Disc blue-ray packaging, sounds magic, isn’t it? 3 CD contains 25 track, where you’ll hear Axel Rudi Pell hits, as well as Steeler songs and bunch of hard rock / heavy metal classical covers. There is a good recording sound, there is a good atmosphere, there are known as hell songs with known lyrics and etc, drum sets and etc etc, all is regular and common, BUT! But what makes this release more than just interesting, is the fact that Axel Rudi Pell has invited many of his friends (you may understand what I mean – various musicians, you can check the list under the review in press-release info section), so, that anniversary concert was just like some fairytale party, with beloved songs and varous musicians! Long playing time, yes, it’s a long one, but if you like Axel Rudi Pell stuff, you’ll understand after end of playing time that was not so many time taken from your life to bring you many more than positive feelings. Also, one of major cover versions, yeah – Smoke On The Water – played with almost the whole invited guests, so it sounds really reach, hehe! And yes, first of all – “Magic Moments” will be great gift for the fans of ARP, and then for those who dig into heavy metal music and old bands as well. Long live Axel and the team! Recommended! Official release date: 27 April 2015. 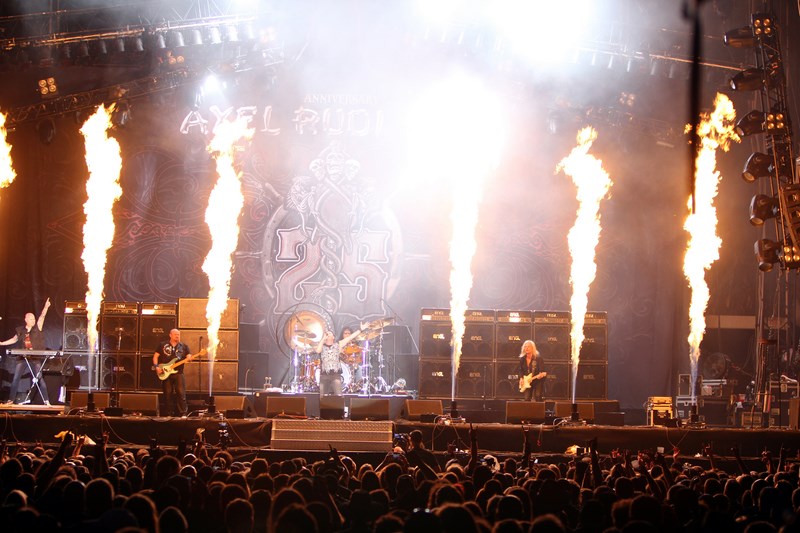 It was a hot summer night and the beach was burning… Wrong song, wrong place!
But the weather gods smiled on Axel Rudi Pell on that memorable magic evening of
July 11th 2014: There had been a severe weather alert, but in the end the floodgates
of heaven opened only during the last song of his regular set, the Rainbow classic
“Long Live Rock´n´Roll“. “That was Ronnie James Dio crying from above,” promoter
Horst E. Franz speculated while bidding his farewells to the almost 15.000 drenchedbut-
happy fans at the festival site.Three hours before the sun went down, creating a
beautiful atmosphere at the ´Bang Your Head´ festival in Balingen/Germany, where
Axel Rudi Pell celebrated his 25th anniversary as a solo artist with a once-in-a-lifetime
performance. The CDs and DVDs you are holding in your hands document a
show that is unlikely to ever be seen again in this constellation – a special present the
protagonist had worked hard for. It took almost a year to set everything up: “The
actual organisation started in the summer of 2014 when the promoter and I went
public with the idea of this event,” Axel tells with obvious relief. He´s still happy about
how things have turned out. With a little help from his friends at his booking agency,
the Bochum guitarist set up an extraordinary line-up. “It was mostly all about personal
contacts”, because after more than 30 years in the business Axel Rudi Pell is not only
well-known, but also well-respected in the worldwide rock community, so the affix “&
Friends“ is not one of those usual exaggerations. Almost all of his favoured
candidates agreed on this one July date. As Axel is an early bird, the whole
organisation was fairly easy. Of course there were rehearsals, but only one day
before the show. Over fifty minutes worth of footage from those remarkable sessions
are featured on the DVD and Blu-ray versions of this package. During those sessions
Axel realized that something unique was happening. “Everybody involved had a blast
and was right on track,” he remembers. Unfortunately, Doogie White had a prior
engagement with Michael Schenker on that rehearsal day, but was replaced with
ARP frontman Johnny Gioeli. And except for Charlie Huhn, who had already agreed
to play a gig in the USA with his current band Foghat, Axel´s former singers turned
out in full force: Rob Rock (1991) and Jeff Scott Soto (1991-1997) together with longtime
ARP drummer Joerg Michael (until 1998) took the stage by storm after a
historical four-song Steeler reunion at the beginning of the show. Axel´s current lineup
put on a best-of show with a blisteringly atmospheric version of the Neil Young
classic “Hey Hey My My“ and a few epic ARP classics like “Mystica“, “The
Masquerade Ball“, “Casbah“ and “Into The Storm“. You could feel those goose bumps
spring up, and the climax was still to come: after a furioso battle between drum gods
Vinnie Appice and Bobby Rondinelli, a long list of rock legends took the Balingen
stage: stepping in for Joe Lynn Turner, who was tied up with business affairs, Pretty
Maids frontman Ronnie Atkins performed a superb version of Deep Purple´s “Black
Night“, including audience sing along. Then John Lawton, the former voice of Uriah
Heep, demonstrated why he still deserves a lot of “Sympathy“ (Uriah Heep), and he
was still looking for some “Tush“ (ZZ Top). When ex-Rainbow keyboard player Tony
Carey joined in for an emotional “Mistreated“, the now available Doogie White and
Johnny Gioeli set the roof on fire. Graham Bonnet, another Rainbow veteran from the
glorious “Down To Earth“ era, remembered the good old times with “Since You Been
Gone“ and, of course, the aforementioned “Long Live Rock´n´Roll“. At the end of
those three hours plus all guests (and friends!) gathered on stage for the grand finale
“Smoke On The Water“. A legendary evening drew to a spectacular close. Are you
happy, Axel? “Of course! I could have played at least for another hour.” Did anything
go wrong? „Nothing, but there was no way we could have prevented those long
change-overs in between.“ But at least the weather gods smiled…
Line Up:
Johnny Gioeli – Lead and Backing Vocals
Axel Rudi Pell – Lead, Rhythm and Acoustic Guitars
Ferdy Doernberg – Keyboards
Volker Krawczak – Bass
Bobby Rondinelli – Drums
Friends:
Steeler: Peter Burtz (v), Tom Eder (g), Roland Hag (b), Jan Yildiral (dr)
Jeff Scott Soto (v), – Yngwie Malmsteen, Journey
Joerg Michael (dr), – Running Wild, Stratovarius
Vinny Appice (dr), – Dio, Black Sabbath
Ronnie Atkins (v), – Pretty Maids
John Lawton (v), – Uriah Heep
Tony Carey (k, v), – Rainbow
Doogie White (v), – Yngwie Malmsteen, Rainbow
Graham Bonnet (v), – Rainbow, MSG
Michael Voss (v) – Mad Max, Bonfire