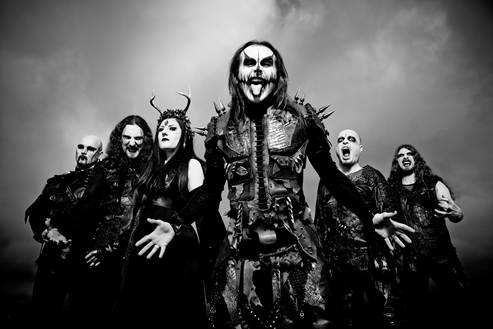 Barbarous hellhounds CRADLE OF FILTH only recently announced the completion, release and cover artwork for their opus nocturne and 11th studio album entitled »Hammer Of The Witches«.

Having been three years since the release of their previous album – this has been the longest gap in the band’s murky history. And the wait is nearing completion.

Fans can get the first taste of the new album in the form of the official video for new track ‘Right Wing Of The Garden Triptych’, which has premiered online.

The video was directed by Sam Scott-Hunter (Devilment, Sipknot, The 69 Eyes), who also took the band’s promotional photos. As well as featuring Dani and his troop of reprobates, model and Kinbaku enthusiast Gestalta also makes an appearance.

Front man Dani Filth commented on the making of the video:

“The video for ‘Right Wing Of The Garden Triptych’ was an immense thrill to film as it was undertaken in a jet-engine testing hangar at a former U.S. Military base close to my home town of Ipswich, followed by an equally surreal afternoon spent under the aerobatic flightpath of the Imperial War Museum. Directed by Sam Scott-Hunter, the video is a realised phantasmagoria of horror and hell-bound heartistry, fully encapsulating the beautality of the first single from ‘Hammer Of The Witches’, and if my flagrant play-on-words doesn’t pique your interest, then the fact that it features a renowned rope bondage queen and the band in full swing just possibly might.”

CRADLE OF FILTH have revealed that »Hammer Of The Witches« will be released via Jewelcase CD, Limited Edition Digipak, Mail Order Edition and 2LP vinyl formats. This highly anticipated and caliginous creation was brought to fruition in Britain’s Witch County, in darkest rural Suffolk at the reputedly haunted Grindstone Studios.

The album’s title is named after the ‘Malleus Maleficarum’, a medieval document of guidelines regarding the persecution and torture of witches – but CRADLE OF FILTH’s title version is more retributory. It’s the »Hammer Of The Witches«; the hammer is in the witches’ hands. It’s payback time.
»Hammer Of The Witches« is due for global release on 10th July via Nuclear Blast. It is the first Nuclear Blast album to have a Global Release Date.