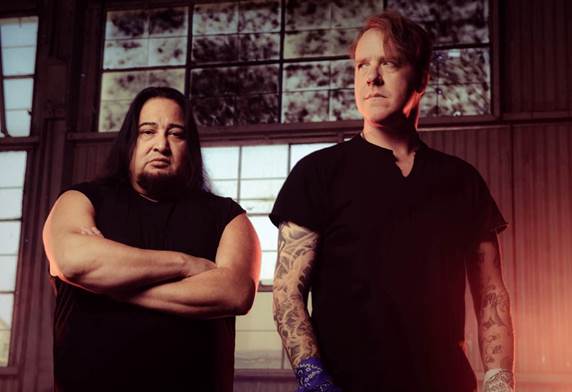 FEAR FACTORY, the pioneers of industrial-tinged extreme metal, have issued the following update regarding their upcoming 9th studio release, »Genexus«:

“The sensation of finalizing our newest album is one of relief and joy, wrapped within a massive whirlwind of excitement,” commented founding guitarist Dino Cazares.

“We really feel this is a very special FEAR FACTORY album. While being careful not to replicate ourselves, this album still has a very classic FEAR FACTORY vibe that we feel will appease both old and new fans.
The aggressive, melodic and industrial elements are all intact and shine more than ever.
Burt and I produced the album with Rhys Fulber co-producing. Damien Rainuad and Giuseppe Bassi handled most of the keys and pre-production. We also enlisted the masterful metallic skills of Andy Sneap for an amazing mixing job!
We would like to thank everyone who has been a big part in the making of this record. We can’t wait for everybody to hear it.”

»Genexus« will be released on August 7th worldwide via Nuclear Blast Entertainment.
The record was co-produced by long-time collaborator Rhys Fulber, along with Cazares and Bell and mixed by Andy Sneap (ARCH ENEMY, TESTAMENT, EXODUS, MACHINE HEAD).

FEAR FACTORY will hit the road this July in anticipation of their upcoming Nuclear Blast Entertainment debut.

Formed in Los Angeles, California in 1989, FEAR FACTORY changed the world of metal and have become a huge influence on the genre ever since their inception.
The band’s unique sound helped bridge the gap between death metal, grindcore, thrash, and industrial on landmark releases like »Soul Of A New Machine«, »Demanufacture«, and the gold-selling release, »Obsolete«.