Home
News
KRISIUN IN THE STUDIO WITH ERIK RUTAN
Tweet 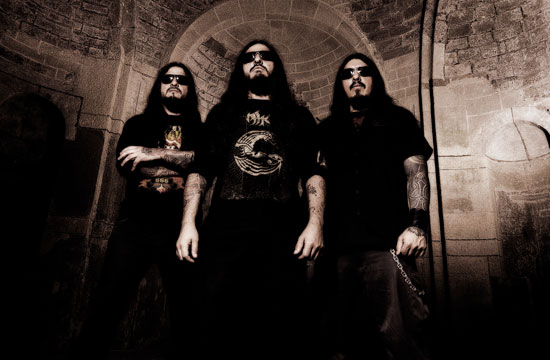 Death Metal maniacs KRISIUN just entered Mana Recording Studios in Florida, USA to start the recording of their new album, set to be released in the late summer/early autumn of 2015.

The producer of the new album is nobody less than Erik Rutan, the brain and heart of death metal masters HATE ETERNAL and former guitarist of MORBID ANGEL. Rutan has worked as a producer for his own band as well as for CANNIBAL CORPSE, NILE, SIX FEET UNDER, MALEVOLENT CREATION, MADBALL, AGNOSTIC FRONT, to name just a few – additionally, he also co-produced KRISIUN’s Conquerors of Armageddon album back in 1999!

“Working with KRISIUN at Mana Recording is such an honor for me. We worked together on ‘Conquerors of Armageddon’ in 1999 during the beginning stages of my producing career and for us to work together again now is just fantastic! KRISIUN are one of the best death metal bands out there. Their bond musically and creatively is so unique. The new material is outstanding….fast and heavy with this savage primal brutality! Lots of vibe and dynamics. The drum tones and performances came out pummeling. The rhythm guitars are huge and tight as hell. The bass is punishingly heavy and attacking. We have started tracking vocals now and starting to work on additional guitars and solos as well. This will be an album every death metal fan surely cannot miss!”