When, in late 2014, guitarists Tchort and BloodPervertor announced that they were leaving Black Metal titans CARPATHIAN FOREST to form their own band the 3rd ATTEMPT, there were some who questioned the wisdom of leaving the safety of such an iconic band in order to start something new. But, less than a year later, on the 25th September, Dark Essence Records is set to release the band’s debut full-length album “Born in Thorns”, which will show just how right the two renowned guitarists were in deciding to leave an environment they felt had become stale and stifling, in order to feel the rush of creativity and enthusiasm once again.

As a taste of what to expect from “Born in Thorns” the track “Art of Domination” has been debuted today and can be heard here:

Barely drawing breath after their announcement, Tchort (GREEN CARNATION, ex-CARPATHIAN FOREST, ex EMPEROR, ex BLOOD RED THRONE) and BloodPervertor ( ex-CARPATHIAN FOREST) chose Ødemark (ex-MIDNATTSVREDE) as their vocalist, following online auditions that elicited responses from both experienced and new vocalists from all over the world. The lineup was then completed with the addition of drummer Tybalt (FORTID, DEN SAAKALDTE) whose performance as a session drummer for the 3rd ATTEMPT at this year’s Blastfest convinced the others that he was the man for the job.

With producer Endre Kirkesola, known for his work with CARPATHIAN FOREST, BLOOD RED THRONE, GREEN CARNATION, URGEHAL, TSJUDER, at the helm, the 3rd ATTEMPT entered the Studio Sanden in Kristiansand to record “Born in Thorns”. Mixing and mastering was done by Marius Strand at the Strand Studio. This is an album that showcases the well-known writing skills of the two founders, as well as contributions from the new members, and turns the old-school Black Metal vibe up several notches by introducing different elements, including rock n roll/black n roll, to produce a unique take on the Classic Black Metal sound, giving it a fresh feeling and a distinctive groove.

Artwork for “Born in Thorns” is by Jon Tønnessen and tracklisting on the ten-track album is as follows: 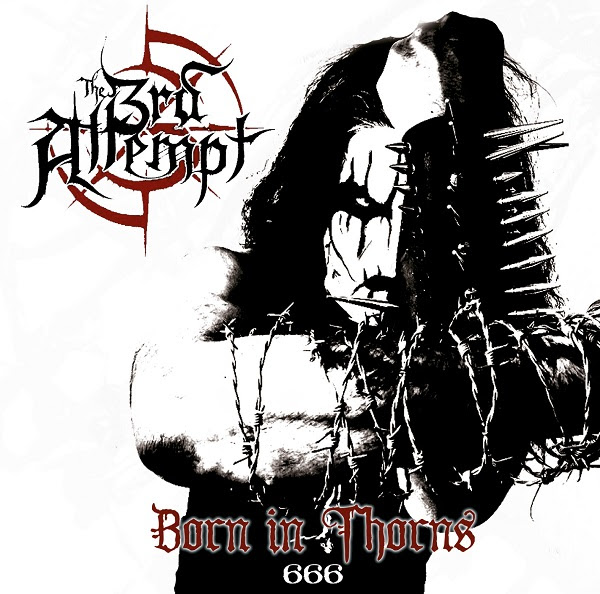