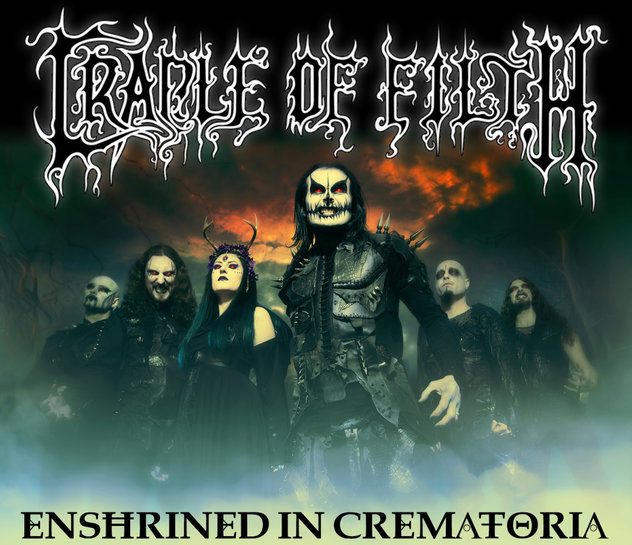 Barbarous hellhounds CRADLE OF FILTH are set to release their forthcoming album »Hammer Of The Witches« on July 10th via Nuclear Blast Records. In anticipation of the release, the band has now released another new track! Listen to ‚Enshrined In Crematoria‘ here:

“Lyrically the track ‘Enshrined In Crematoria’ is hilted in the legendary Ark Of The Tragedian, the poet’s Holy Grail. It is the author’s inspiration personified as a tombed angel, much like that of Poe’s pale obsession, and the magickal ‘midnight’ ritual wherein she is conjured forth as a reincarnation of his lost love, to provide forbidden artistic sustenance. It is imagination’s utter peak and fuel for a literal literary madman. ‘Enshrined In Crematoria’ is at essence the first of guitarist Richard Shaw’s contributions to the new album, before the full band took it by the teeth and spat it into light.”

Coinciding with the release of »Hammer Of The Witches«, CRADLE OF FILTH will play release show at this year’s ROCK HARZ Festival on Saturday, July 11, 2015! For more info, surf to the ROCK HARZ homepage. For those who cannot attend this special night, you’ll have your chance at this year’s SUMMER BREEZE Festival!

The band’s highly anticipated and caliginous creation was brought to fruition in Britain’s Witch County, in darkest rural Suffolk at the reputedly haunted Grindstone Studios. The album’s title is named after the ‘Malleus Maleficarum’, a medieval document of guidelines regarding the persecution and torture of witches – but CRADLE OF FILTH‘s title version is more retributory: It’s the »Hammer Of The Witches«; the hammer is in the witches’ hands and it’s payback time.

»Hammer Of The Witches« track list:
01. Walpurgis Eve
02. Yours Immortally…
03. Enshrined In Crematoria
04. Deflowering The Maidenhead, Displeasuring The Goddess
05. Blackest Magick In Practice
06. The Monstrous Sabbat (Summoning The Coven)
07. Hammer Of The Witches
08. Right Wing Of The Garden Triptych
09. The Vampyre At My Side
10. Onward Christian Soldiers
11. Blooding The Hounds Of Hell
Bonus Tracks:
12. King Of The Woods
13. Misericord