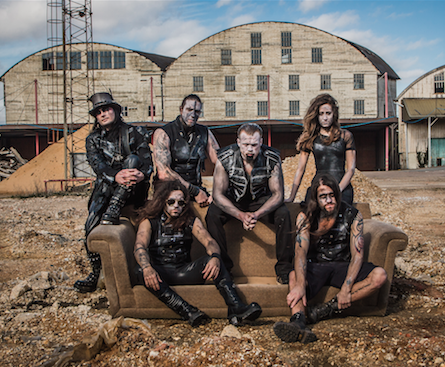 Dani Filth’s Witch County slippery horrors DEVILMENT have announced their spanking new guitarist to be one Sam S Junior (seated, bottom left) who has joined the DEVILMENT ranks just in time for their appearance at this weekend’s Hammerfest in Pwllheli, North Wales.

Writing for the follow-up to DEVILMENT’s debut album “The Great And Secret Show” (out now on Nuclear Blast Entertainment) has already begun with new guitarist Sam S Junior, and promises to be a step-up from the previous material, which in all fairness, is pretty fucking good already.
And if you don’t already possess it, the album as well as stunning merchandise can be bought over at the Nuclear Blast Mailorder.

Welcome to the Werewolf Corps, Sam!