Can you tell us each of the member of the band, and what instruments they play?

Tell us the beginnings of Night Demon, and why the name Night Demon. How did you guys meet?
Just three guys in the local Southern California music scene with a mutual love for NWOBHM. We decided it was time to get together and do it, since nobody else had as much interest in it as we did. We always wanted to have a song named after the band. Night Demon was the first song we wrote. We were shocked that the name hadn’t been taken and we thought it sounded very metal, so we went with it.

I love your old school sound. Its nice when bands retain an old school sound in a modern age. What are your musical influences?
Classic heavy metal and hard rock. The immediate bands that come to mind are Iron Maiden, Saxon, Diamond Head, Judas Priest, and Angel Witch.

You put out the EP Night Demon in 2012 and put out a full-length album Curse of the Damned this year. Any plans for another album in the future?
Yes, we are currently writing for the next record to be released in 2016.

How long did it take you to record and make Curse of the Damned? What were the highs and lows in the making of this album?
We spent months demoing the songs in a real studio and recording them for what would be the finished product, but the vibe just wasn’t there, so we took a break, went and toured Europe, then came back and recorded everything in three days.

Looking at the Night Demon website, you are engaged in an extensive tour of the States, Canada, and Mexico. That is awesome! Where are you in the tour right now? How is the tour going so far?
We are in Wilmington, NC. The tour has been really great so far! We are only a couple weeks in, but we are having a blast and meeting old and new fans along the way.

Are there any social media links fans can go to, to get more information about the band, get merchandise, etc.?
www.nightdemon.net is our website. It has links to all social media pages and the web store.

Tell us some of the bands you’ve played alongside with, festivals you’ve played etc. Which band did you enjoy playing with the most? Which show/festival has been the most memorable so far in your musical careers?
Angel Witch, Diamond Head, Raven, Uli Jon Roth, UFO, are some of the ones we’ve really enjoyed. The best festival was Keep it True in Germany, 2014. Huge crowd and lots of ND fans!

Can the fans find you in any paper mags?
Decibel here in the states has covered us, more recently. In Europe there’s over fifty publications that give us love. How do you describe your music to people?
Classic heavy metal.

What is your favorite song to perform off your latest album, and why? What was your favorite song off the Night Demon EP and why?
Screams in the Night. It was one of the last songs we wrote for the album, and it has a lot of energy and some cool changes in it. Ritual off the EP. I guess I like that one for the same reasons. It really gets the audience going.

Ok, I have some fun questions to ask you I think your fans would enjoy. Each of you please tell me:
A. If you could play in any other band, which one would it be?
I would like to sing for the band Jaguar. I really love the vocal stylings and think it would be a lot of fun.

B. What was the first concert you attended?
Monsters of Rock 1988 at the L.A. Coliseum. Van Halen, Scorpions, Dokken, Metallica, Kingdom Come.

C. What was the first CD you ever bought?
Michael Jackson’s Dangerous.

D. Do you have any hobbies?
Just music. I like to play basketball when I get a chance.

What is the inspiration for your songs?
Evil and darkness. 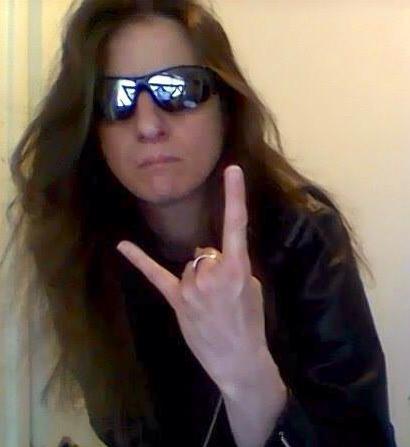