Jørn “Necrobutcher” Stubberud – Norwegian musician. He is best known as the bassist in the black metal band Mayhem under the stage name Necrobutcher. He is one of Mayhem’s founding members, along with Euronymous, Manheim and Messiah. He’s the only original member to remain in the band, as Messiah and Manheim left Mayhem, respectively, in 1986 and 1988, and Euronymous was murdered in 1993. He was in the band since 1984, but left in 1991 due to personal concerns over media and police attention following the suicide of former vocalist Dead as well as internal conflicts and disagreement with bandmate Euronymous. He was replaced by Varg Vikernes as a session bassist. In 1993, Vikernes was arrested and sentenced to serve 21 years for murdering Euronymous. In 1995 Stubberud reunited the band, along with Hellhammer, Maniac and new guitarist Blasphemer, replacing the deceased Euronymous, and still plays in Mayhem; however, according to Mayhem guitarist Blasphemer, he did not play bass on their most recent album Ordo Ad Chao. He has also played in other bands: L.E.G.O., Kvikksølvguttene, Bloodthorn (guest artist) and Checker Patrol. He, along with Mayhem guitarist Blasphemer, is featured in the documentary Metal: A Headbanger’s Journey at Wacken Open Air, in which Stubberud gives a drunken and profane interview to Sam Dunn. Necrobutcher has a tattoo with the Mayhem-logotype on his back, from shoulder to shoulder. 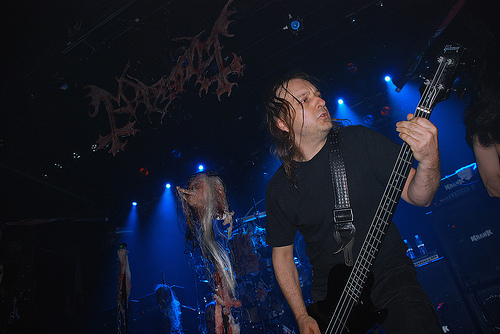