Lanzon has worked with diverse performers of distinction in the rock and roll community. Both as a session musician and sideman, he has also played for Grand Prix, Grant & Forsyth, John Lawton (former Uriah Heep-member), Mick Ronson, Chris Spedding, Sweet, Paddy Goes to Holyhead and Tarracco.

At the age of eight Lanzon learned to play the piano. In 1966 Lanzon played in his first band called The Loose Ends. Covers of soul songs were played. With this band Lanzon tours through Europe. Thereafter he played with The Cats Pyjamas from 1968 until 1969. With this one a few singles were recorded. One of them was “Baby I Love You” by The Ronettes. Lanzon married, started a family, and began to study harmony, counterpoint and composition at the Guildhall school of Music and Drama.

He then got excited by the music of Styx and Journey, and with his newly gained expertise in composition saw the direction he would head towards.

In 1977 he joined a new band: Romance with Neil Carter, later with UFO and Gary Moore. The band just exist a short time, but had recorded a demo of four good songs; one was a Lanzon: “Show Me the Way to England”.

In 1978 Lanzon auditioned for a band called Raw Deal that needed a singer. Lanzon actually auditioned them one by one until Bernie came in with his high range and that suited the band perfectly. This incarnation became Paris. At the end of the 1970s Lanzon was often asked as a session musician. That’s why he can be heard on the June 1980 recorded Hot Chocolate hit “No Doubt About It” and on the Bucks-Fizz Eurovision hit “Making Your Mind Up”.

Early 1980 Lanzon plays keyboards on the Cris-Spedding album I’m Not Like Everybody Else.

At the end of 1979 Paris became Grand Prix, and Lanzon played keyboards on three albums. The first album was released in 1980 at RCA-records. Bernie Shaw (vocals), Michael O’Donoughue (guitar), Ralph Hood (bass), and Andy Beirne (drums). The second album from 1982 There for None to See sees Robin McAuley replacing Bernie Shaw. The third record Samurai is released in 1983 by Chrysalis Records. The Grand Prix sound can be described as melodic hard rock with some clear Styx and Journey influences. After the third album Grand Prix called it a day due to a lack of managerial support.

In 1984 Lanzon replaced Vic Emerson of Sad Café for a British tour.

Lanzon appears on both Steve Glen singles “Thats Alright by Me” / “Just the Way We Are” and “Down Among the Dead Men” / ‘I’m Alright Jack”. Lanzon is also to be heard on the album Look Left, Look Right by Steve Glen.

In March 1985 Lanzon joined the band Operator. His fellow band members were: Robin McAuley (vocals), Chris Glen (bass, before with SAHB and MSG), Mick O’Donoghue (guitar) and Phil Taylor (drums; ex – Motorhead). How promising this line up may have looked, it dissolved in May 1985.

IN November 1985 Lanzon played keyboards on Phil Taylor’s Naughty Ol’ Santas Christmas Classics (a rarity). O’Donoghue, Glen and Taylor started GMT the same month, and recorded the mini LP War Games at ‘Mausoleum’ with a new guitarist Marcus Schleicher. This record was released on CD in 1991. All 5 songs are co-compositions of Lanzon. The song “Fall in Line” was played by Lanzon. In November 1985 GMT ended up. Robin McAuley joined MSG; Phil Taylor went to Frankie Miller before he rejoined Motorhead again.

In July 1985 Lanzon played keyboards and drums on Big Bang, an album from the German band Tarraco, who recorded their album in Hamburg as in London. It’s experimental disco with a lot of drum work by bandleader Dicky Tarrach (Rattles). Lanzon composed one song and did his part on another one. In August 1985 Lanzon ended his work for Tarraco.

In September 1985 Lanzon joined The Sweet. With him joins Paul Mario Day, ex- Wildfire, as a new singer. With this new lineup The Sweet recorded their live album Live at the Marquee. At this time McNulty bass, and both founder members Andy Scott and Mick Tucker formed the band. At the same time a live video was released at Sound and Vision. On this album Lanzon’s co-composition: Shot Down in Flames, “Over My Head”, and “Jump the Fence”. Lanzon didn’t make it to the next studio album. In July 1986 Lanzon broke up with The Sweet. A few weeks before Lanzon did a minor Germany tour with The Sweet. They also played Heimatstadt in the Achen Metropolis on 3 May 1986. The tour was called ‘Satisfaction Guaranty’. Satisfaction is what sweet guru Michael Motzkou became that night. He was carrying a box of cola which Lanzon threw into the audience … just for fun. Michael showed him his middle finger and disappeared. A lot of talking was needed to clear the air.

Lanzon joins Uriah Heep by replacing John Sinclair. With Heep Lanzon goes on a US tour. At that point Steff Fontaine was singer for a few months. In February 1987 Lanzon was asked by Andy Scott to play on the debut single of pub-rock band Paddy Goes to Holyhead. Lanzon had his hands free at the time, so he went into the London Bridge Studio. Here the recording of the single “The Green Green Grass of Home” / “(Telling Me) All Those Lies”. The band’s lineup: Danny Hynes (vocals), Andy Scott from The Sweet, Mal McNulty (Sweet and ex- Weapon), Jeff Brown (Sweet and ex -State Trooper) and the once Wildfire, Weapon, and Praying Mantis drummer Bruce Bisland. The single was not that successful. December of the same year Lanzon again went into the studio to record the maxi – CD with the cover song “Delilah”. Also recorded to CD, and released in 1996 are “The Green Green Grass of Home”, “(Tell Me) All Those Lies”, and “Delilah” to be found on the CD box of The Sweet titled Hannover Sessions by Pseudonym.

Right after Lanzon spend his time with Heep. In December 1987 “Live in Moscow” was recorded and released in 1988. For the first time with Heep Lanzon shows he’s an important songwriter (and singer!!) with his song “Mr. Majestic”. The 1989 release of Raging Silence is the first Uriah Heep studio album for Lanzon. From this album “Bad bad man” is composed by Lanzon. In 1991 the heavily criticized Different World released. In 1994 a techno/dance version of Gypsy goes around. On this maxi-CD four different versions of the song are recorded: “Lucky Heather Mix”, “DJ Club Mix”, “Wedge Mix”, and “Radio Mix”. The track time of the last one is more than 23 minutes.

In 1995 the long-awaited Sea of Light is released. At 8 of the 12 songs Lanzon did his job on the composition part. His own song “Mistress of all time” belongs to the strongest pieces of the album. The main opinion is this album is the best of Uriah Heep ever since the Byron lineup. Lanzon succeeded in bringing back the roaring Hammond organ sound.

September 1998 Sonic Origami, the latest album of Uriah Heep, is released on the (UK) Eagle Records label. Lanzon is heavily involved in the composition work. Like on Sea of Light he worked a lot with Mick Box as a songwriter duo. His songwriting potential is best shown in “Between Two Worlds”; he was also heavily involved in the arrangements, and in the epos “Golden Palace”, a deep-going bombast symphonic rock song.

During a Scandinavian tour in February 1999, Lanzon began to write short stories to kill wasted time on the road. Over the new decade he would go on to perfect one of those stories which is at the moment being read by a top Hollywood producer.

Heep recorded the acclaimed Acoustically Driven in 2001. Lanzon scored the arrangements for the string quartet. This was followed by touring and festivals which included the release of various Heep DVD’s.

The long-awaited release of “Wake the Sleeper”, 2008, and consequently “Into the Wild”, 2011, saw Lanzon’s songwriting establishing itself again. Some say that “Between Two Worlds”, “Golden Palace” and “Trail of Diamonds” were heading more towards the ‘prog’ side of Heep. Lanzon thinks that the next album may enter those bright waters a little more deeply along with the straight-ahead rock songs.

Lanzon has written a sequel to his screenplay but it is at first-draught stage. His writing energies seem to be relentless.

Lanzon lives in East Kent with his partner in life: Patina. He has three children from his one and only marriage; nine grandchildren and one great-grandchild – all wonderful and living in Hampshire. 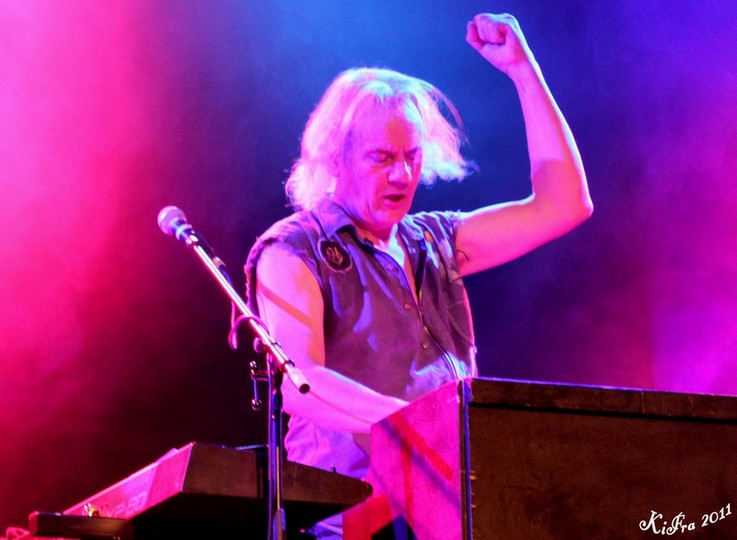