A lesson in Industrial Black Metal by an old school horde hailing from Finland, laying terror around the world with unforeseen force.

Formed in 1997 in Kuopio, a city and municipality located in Northern Savonia, Finland, the unrelenting Industrial Black Metal horde known as Trollheims Grott can be considered unsung pioneers of Industrial Black Metal, with their first two records, Bizarre Troll Technology and Bloodsoaked and Ill-Fated, released in 2001 and 2003, respectively, serving as benchmarks for the idiom, pushing forth a sleek and psychotic sound executed with the utmost cruelty. Now in 2018, 15 years later, the time has arrived for Trollheims Grott to unleash their carefully prepared third bloodthirsty beast from their syndicate laboratory, the crushing and austere Aligned with the True Death, an album that shall lay terror around the world with unforeseen force.

Comprised of sg.7 on vocals, synths and noise, LRH on guitars and drums and TG on bass, Trollheims Grott unload a furious whirlwind of shock-force drums and razor-caked riffs in Aligned with the True Death, with mechanized industrial elements providing no-less-devastating support fire, all conveying the sensation of war-machines of the Apocalypse razing the last remmants of this doomed millennium. Mixed and mastered by J. Tolsa at Note On Studio, Aligned with the True Death is not only one of the best and most imposing albums of extreme music from the current independent scene, but also a bold and austere statement that all the fury that was dormant during Trollheims Grott’s 15 years of absence is back to haunt the souls of the lighthearted.

And the band’s aforementioned apocalyptic and mechanized sounds ignite the rip-roaring title-track Aligned With The True Death, kicking off the album in full force with LRH slashing our senses with his metallic riffs, while sg.7 gnarls and barks manically in over seven minutes of modern-day extreme music, feeling crisp and electrifying from start to finish. Total annihilation continues in the action-packed tune “Deathless Form”, leaning towards more traditional Black Metal with LRH demolishing his drum set, being flawlessly complemented by TG’s menacing bass lines. Put differently, this can easily become part of your playlist for witnessing the end of the world as we know it. And the razor-edged guitars by LRH dictate the rhythm in the also frantic and dense “Omega Angel”, with sg.7’s growls getting more enraged and demonic, generating an onrush of violent sounds and noises tailored for fans of the darkest form of Industrial Black Metal. Then it’s time for an avalanche of vibrant and hellish Black Metal by Trollheims Grott entitled “Holy Black Sun”, bringing the most destructive elements from Blackened Death Metal while its vocal lines and riffs showcase a Behemoth-inspired energy and vibe, with LRH blasting aggressiveness through his beats and fills nonstop. Following such gargantuan level of aggression we have “Twilight”, a purely instrumental display of obscure and metalized music led by the piercing guitar lines by LRH, more introspective and cryptic than the rest of the album, setting the tone for “LXFR”, where a mysterious and phantasmagorical aura embraces the band while they keep firing their brutal Black Metal infused with modern and fresh nuances from Industrial Metal, with highlights to the bestial growls by sg.7 and his mesmerizing synths. Finally, their last breath of infernal and industrialized Black Metal comes in the form of “Earth’s Last Stand”, the most dissonant, brutal and desperate track in Aligned with the True Death, with LRH and TG slashing their strings mercilessly with the support of the stone crusher LRH, beautifully scathing our senses until the song’s abrupt grand finale.

In a nutshell, Trollheims Grott did a beyond amazing job in Aligned with the True Death, delivering first-class extreme music that will please both fans of old school Industrial and Black Metal and admirers of more modern versions of those idiosyncratic genres. Let’s just hope they don’t take another 15 years to release new material, with the extremely high quality of the music found in Aligned with the True Death inspiring them to write more of their lancinating music for our total delectation. Hence, we can all keep in touch with the band on Facebook, and show them our utmost support by purchasing their new album from the W.T.C. Productions’ BandCamp. On a side note, the official release of the album is set for October 31, which is coincidently (or not) our favorite party of the year, our beloved Halloween, and that obviously means that on Halloween night we’ll all have the most demented, dark and venomous soundtrack for our uncanny and mischevious celebrations, courtesy of this awesome Finnish horde of chaos. 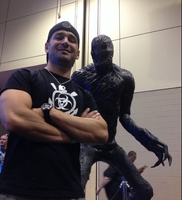 Interview: GM and KG of Barshasketh

I have the absolute honor of publishing my