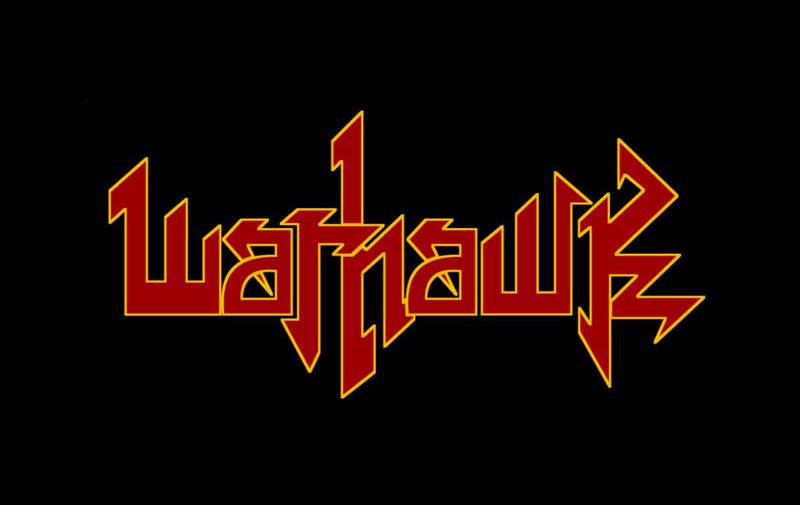 Hello Fabio! How are you these days? You have found new job, so, does this not affect on your daily life and Warhwak too brutal?
Hi Aleksandr, yeah right now I’m working a lot but I’m a free lance so I work hard some period and I’ll work less others, but there’s always time to make something for Warhawk and drink some beer at the pub.

Please make a brief overwiev of Warhawk for readers, like when, where, by who and for what the band was created?
We are Warhawk – heavy speed metal band from Venice, Italy, since 2012. The original line up is the same of today: Ammonio drums, Gorby bass, me and Ricky guitars and Chianti as voice. Everyone of us left their previous bands, so we decided to made a brand new one following the main idea to go back to our past and beginning to build everything from the basements. That’s why we found on old school 80’s heavy metal the starting point, the beginning. We try to walk, with Warhawk, our own route, so we decided to name our first EP “Down in hell”, as Dante did writing the Inferno.

Born in 2012, is this correct date of your first meeting, or you planned to create Warhawk long before 2012?
Absolutely we don’t. There was an idea but it was a kind of utopia because we was too busy with other bands. It all started because it occurred the chance to do that. I remember as it was yesterday when me and ricky were totally wasted at the bar and we said to ourselves: yes let’s do it! But the day after in contrast to what usually happens, where we forget everything, we started working hard. And that’s it: Warhawk was officially born. All of us was there in that night and it was so easy to find the members. Moreover you can understand that we are first great friends and then bandmates.

Two long years has been passed before you recorded your first stuff “Down In Hell”. You call it demo, but looking to the all sides that’s an album, as for me, ‘coz there’s full-length and proper sound quality, thus it doesn’t sounds like a demo; so why you decided to call “Down In Hell” like demo record?
We call “Down in Hell” demo because it is. It was our first product, recorded with very low budget, including songs that no one has ever listen. For us demo, as the name suggests, means demonstration, a business card, an introdution of ourselves. It’s like to say: hi I’m Fabio and that’s me. I read some reviews telling that is not possible to call demo a 30 minutes cd and so “Down in Hell” is more an EP and stuff like that. Ok. No problem. Different point of view man. Enjoy others 15 minutes of free music. For us making just a 4 tracks Cd was like starting a discourse and never finish it. By the way calling that Demo or EP doesn’t change my life. 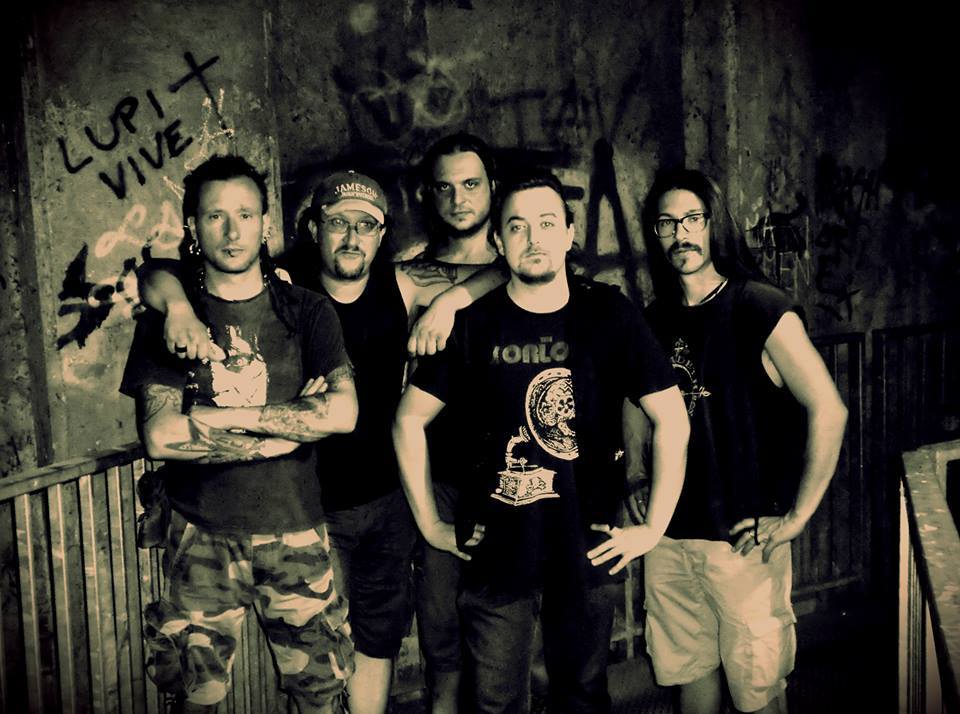 What the sense you have out into band’ title?
All of us are interested and someone obsessed (Ricky and Gorby) by history, overall the period between the WW1 and WW2. One day Ricky proposed to us this name after viewing a documentary about the Flying Tigers campaign in China. I remember that I joked with him telling that drawing tigers faces on a plane bomber was the most glamour way to kill people. But he was right, the flying tigers enclose our spirit: one unit, with few people against many others. And Warhawk was a lethal plane built to leave his mark, as we try to do.

Do you know there are two another bands with the same title? One comes from Czech and other from USA. Do not you give a fuck about the same titles?
Yes Chianti told us that, but we really don’t care.

Ok, recently was released your first stuff, aforementioned “Down In Hell”. Please tell a bit detailed about it. I mean what is the main theme of the album, any message to the listeners etc.
Down in Hell is a 7 tracks cd recently produced in partnership of the Ukrainian label Dead Center Productions. As said before it was named Down in hell for remarking the beginning of our personal itinerary with Warhawk. So you can understand that, musically, we are very selfish guys: we play what we like and we enjoy that. The music is extremely old school and, that’s a personal choice, to catch metal on his purest essence. There are many topics on our lyrics: songs talking about: history (as Flying Tigers, Warriors of the Seas and Running from Vengeance) present (Bloody Brawl and Rising From The Dump) and inward-looking (The Dark Road and The World I Have Enough). In few words Down In Hell speaks about time and his effect on human behaviour. Our hope is to connect people with us and if that happens they will understand us. Be sure about that.

I know you have plently of gigs, did you played within Italy just and no abroad still? How Italian fans supporting Warhawk? Do they buying your stuff on gigs etc?
We don’t have a fans. We support all the people who play metal too. We are a little/big family. Of course we have our natural dimension on the stage, but the best way to be there, is to be with them. And we still are ourselves. Drunk people who wants enjoy the moment and the stage. And people understands that and they have good time too with us.
Anyway we played and we will play with some international bands like Evil Invaders, Peruvian Cobra, SDI  and we are proud of that but we are still searching for the international call. We really hope it will arrives very soon.

Every band have it’s own so called “raider-list”, so what about Warhawk, what are your demands for gig organizers?
Not so much, a fridge full of beers and a floor where sleeping it’s enough for us. We don’t agree to pay what we do for passion, because we are nomal guys with family an house to pay and problems with our bosses. We always talk with all the dates organizers to resolve any problems. So you want Warhawk on your club and the travel costs 100? Hold on and we can play 4 dates for 25. That’s it.

I see you have the same line-up as was from the start. So can you tell us this is the most powerful and forever one? Are you all close friends behind the music or just like musical partners? How did you met at all?
We met each other very long time ago. Venice is called as city but it’s small as a town. In different ways we were always together: drinking in the same places, sometimes playing in the same bands. We always supported each other. First as friends and later as musicians. Personally I never conceived Warhawk on a different way.

Your music is killer mixture between heavy and speed metal, but what about your favorite bands on the metal stage, do you listen to Metal related stuff only, or maybe you have some non metal musical tastes?
Generally a metalhead is a very lucky man or woman, just becase he doesn’t need to search in other kind of music what he is searching for. Just because metal have it. And if you need something more he search it on the neighborhood: as punk music or 60 and 70’s hard rock music. It’s like to have a good whiskey bottle at home but you don’t have the ice. Or you ask it knocking to the next door or you can drink it without ice. For sure the result will be the same.
Otherwise I don’t want to make a list of my favourites bands because it’s like to ask to a mother which is her favourite song… let just say that Heavy Thrash and Speed is the best for me.

And, what the bands from the past do you worship to still? Do you like all the albums released last years? And do you still looking for some new bands to listen to their music and decide if it’s shit or awesome stuff?
Probably we play old school heavy metal because we miss it. Actually music is made by producers not by musicians so people are glad to see old bands reunion just because on theese there is the genuineness of making music. By the way metal can give much more and it has to give it without compromises because we all still are underground and underground music have no bosses. If new metal bands start to compose their music thinking more to their selves than to listeners, people will respect that. I respect that, because I can get that. This world is full of awesome bands, people have just to find them and listen. 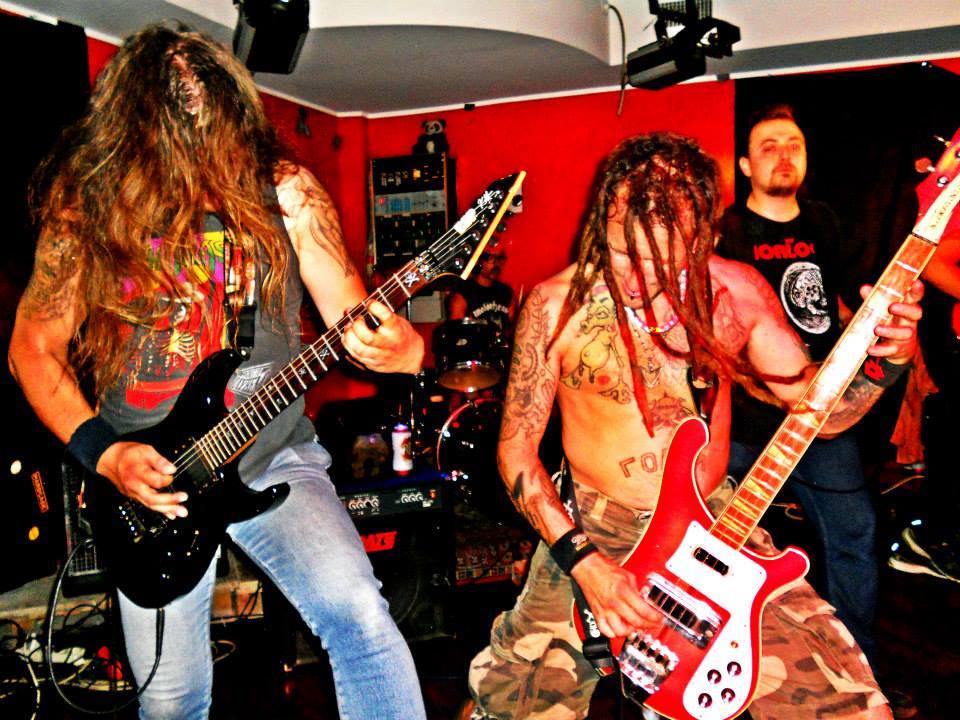 You located there in Venice. Is there some other bands except of Warhawk? And is these some “crowd” which can be named as “metal army”, hehe? How hard or easy to live there in extremely touristic city? Always unknown people walking all around, maybe too many trash on the steets etc?
It’s so difficult to make a band in Venice because there are not suitable structures to do that. And the bands, like us, who have a rehearsal room on the mainland, don’t have the right transports to reach it easily because we don’t have the car on our home garage. There are not cars in Venice.
Venice still a small, fragile, sea city, continually trampled by tourists and politics who work more for not venetians than for us. Some genius calls the city Veniceland because it seems a big amusement park. Talking about metal, the scene never leaved this city, many great bands started from here and some of them are still playing. New bands makes me smile looking forward to the future. In few words we have our own metal army as everywhere.

Several years ago I noticed that Polish metal scene was extremely active as for metal, last two years I see Italian metal scene raising… How could you comment this, maybe have just miss something and there was always huge metal scene in Italy, or this is really something like “raising”?
Metal never leaves this country, Italian istitutions do it, or better they never considered culture generally. Time ago we were respected for arts as paintings, sculptures, writings, movie making, theatre and many more but right now to spend money for that become almost a suicide. The same is for metal: metal scene in Italy is made by the bands and the fans who believe on their passion. I’m sure that in Poland is happening the same and they have to be proud of it. Anyway a talented band is like alcohol you can find it everywhere. Eheheheh.

Ok, do you have any new stuff composed? If you do – please tell us what fans may expect from that and when you planning to unleash it?
People want we continues on our way. But they will have something faster ahahahah. We hope to be back on studio in october. But we like to think about present, working hard and kicking asses.

That’s all for now, but we’ll surely continue this chat there in Venice with the tons of beers this year, hehe! Stay metal and true my friend! \m/
Cheers my friend. Now I go to the pub!