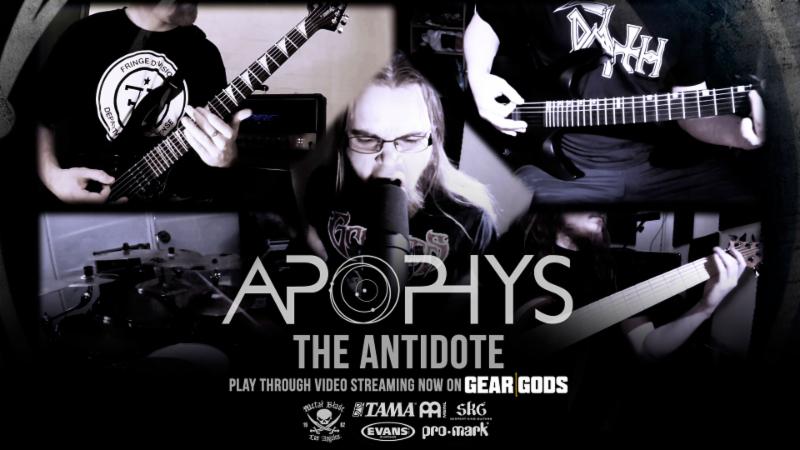 Already piquing the ears of critics both stateside and abroad, Sound The Charge issues of the offering, “APOPHYS, while still quick and with a good chunk of technicality present, have clearly made the song writing the number one focus and as such, have created songs that are memorable and succinct. The songs don’t blend into one death metal mess…,” while Glacially Musical notes, “Prime Incursion is uptempo, dynamic, and has a great mix. APOPHYS has quickly carved out their own niche in a genre full of too many imitators.” Adds No Clean Singing of the track “Miscreants” specifically, “The pummeling begins immediately with a phalanx of hammering riffs that seem dedicated to pounding you into the ground like a nail driven through wood, and the start-stop jackhammering doesn’t stop. The music is a ticket straight to headbang city, but that’s not all it is.”

As another Prime Incursion teaser, today Gear Gods is hosting the play-through video accompaniment to “The Antidote,” with the band elaborating of the track,

“‘The Antidote’ is a death metal must. The drums are fast, the riffs are fast, the vocals are fast, you get the picture. The song tells a story of humanity’s ultimate cure for itself, a final solution as people start to transform into beings that are focused on nothing other than consumption. This gives it a twist one could see relevant to our current society. Eventually the urge to consume backfires resulting in humanity consuming itself and thus, providing the answer to the final problem; us.”

A word derived from Apophis, an asteroid that, upon initial observations, indicated a probability that it would hit Earth on April 13th, 2029 causing a collision of immeasurable proportions, APOPHYS was spawned in 2012 and have since been surgically carving their path within the annals of the modern death metal scene. Prime Incursion was mixed by vocalist Kevin Quilligan and mastered by Stefano Morabito at 16th Cellar Studio (Fleshgod Apocalypse, Hour Of Penance etc.), and will be released in North America on April 7th, 2015 via Metal Blade Records. Preorder bundles are still available at metalblade.com/apophys where you can also test drive first single, “Requiem For The Absurd.”