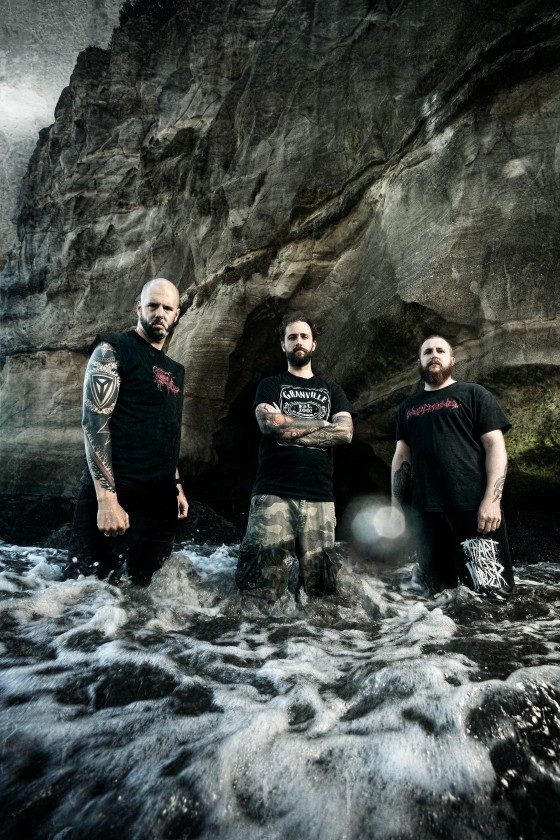 The Tides Of Damocles is the furiously menacing forthcoming new long player from long-running New Zealand-based progressive death metal unit, DAWN OF AZAZEL. A name referencing the ocean as a metaphor for the forces of life that constantly assail and erode the will of those who seek power, The Tides Of Damocles marks the trio’s first new offering in six years. Recorded, mixed and mastered last year at Mana Recording Studios (Cannibal Corpse, Hate Eternal, Goatwhore, et al) in Tampa, Florida by Brian Elliot and J.J. Hrubovcak, the ten track creation hurls forth forty-eight minutes of harrowing, scrupulously detailed death metal mastery.

The first taste of The Tides Of Damocles comes in the form of the “Vassalplasty” lyric video. Created by Scott Rudd (Aborted, Acrania, Fit For An Autopsy), watch here:

“Tides is a diverse album, and we felt ‘Vassalplasty’ is the song with the most immediate impact: Heaviness and aggression mixed with a taste of some of the more psychotropic elements to be found on the rest of the album. The title is a play on the surgical procedure to straighten a fractured and weakened spine. The lyrical theme is retaining a backbone in the face of circumstances that would cause others to conform, submit or crumple.”

“The song is itself a raging, storm-lashed assault, driven by blistering riffs, highly weaponized drumming, and raw vocal vitriol. It’s a tightly controlled frenzy, the kind of murderous outburst that somehow manages to be both chaotic and machine precise. The song is laced with inventive instrumental excursions and packed with grooves that are powerful enough to crack skulls. Both viscerally powerful and technically eye-opening, it will awaken the predator in you while simultaneously re-wiring your brain.”

DAWN OF AZAZEL will bring their bestial compositions to the stage on a slew of live excursions through New Zealand and Australia with future live demolitions to be announced shortly.

Crowned, “metal in its roughest and most primal form” by The Metal Observer and influenced by the violent sounds of Order Of Chaos, Immolation, Sarcofago and the like, DAWN OF AZAZEL was forged in 1999 and rapidly established themselves with relentless live shows throughout New Zealand and Australia. The release of two demos and a 7″ received widespread acclaim within the underground fanzine and tape trading community. DAWN OF AZAZEL would later release their debut, the volatile The Law Of The Strong, though Agonia Records in 2003 followed by an extensive tour through New Zealand, their first ever shows in Europe and a headlining tour of Australia. Second full-length, Sedition, was unleashed via Ibex Moon and found the band playing over one-hundred-and-twenty shows touring first through Thailand, Indonesia, and the U.S., followed by thirty-two shows through Europe supporting American death metal icons, Immolation. Australian tours with Deicide, Katyklysm and support slots on their homeland for Motörhead, Korn, Suffocation and Children Of Bodom capped off a year and a half of live bedlam to support the album. The band’s infamy was further bolstered by the controversial mix of the band’s violent and Satanic lyrical content and frontman Rigel Walshe’s occupation as a police officer becoming the subject of television and newspaper coverage at home and abroad.

Seeking a level of professionalism that could not be found at home, the band entered Erik Rutan’s famed Mana Studios in Tampa, Florida to record their third offering, Relentless, released via Unique Leader Records. Live journeys alongside Krisiun as well as support slots for Megadeth, Suffocation, Aborted, The Faceless, Necrophagist, Dying Fetus, Morbid Angel, and Slayer ensued. Shortly after its release, Walshe was offered a position of a covert nature within the police department. During this period from 2010 through 2013 the band went on hiatus and focused on creating new material, re-gearing their personal circumstances to enable them to take the band to greater heights. 2013 was spent composing new material, and in early 2014 the band once again entered Mana Studios to record their fourth album The Tides Of Damocles.

The Tides Of Damocles will be released independently via the official DAWN OF AZAZEL BandCamp page at THIS LOCATION on April 28th, 2015 and come available digitally and as a stunning, deluxe, six-panel digipack with 20-page booklet. Preorder your copy today.