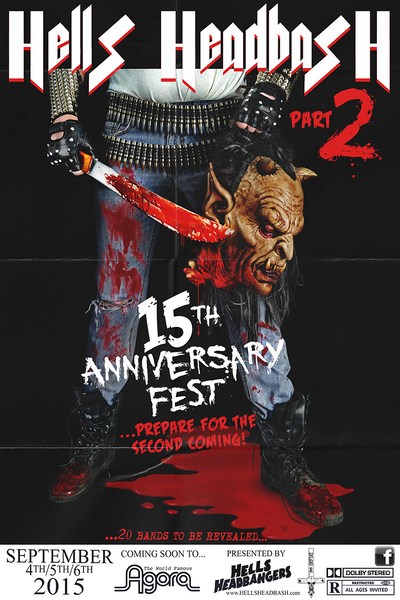 At long last, Hells Headbangers announces the final lineup for their three-day “Hells Headbash – Part 2” festival, set to take place in Cleveland, Ohio on September 4th-6th. After the resounding success of their first “Hells Headbash” last summer – which was held at the label’s distribution warehouse, and was filmed for a special DVD release set for later this year – Hells Headbangers expanded the fest to include an additional day and with an even more epic lineup of HHR-affiliated bands. Set to take place at the world-renowned Agora Theater, “Hells Headbash – Part 2” will feature the first American performances by Satanic Warmaster and Destruktor and exclusive performances by underground legends Archgoat and Profanatica, as well as 31 other Hells Heabangers-supported bands that span the spectrum of death metal, black metal, thrash, grind, metalpunk, and plenty of filthy points in between. The full list of bands, in alphabetical order, are as follows:

Label head/co-founder Chase Horval had the following to say about “Hells Headbash – Part 2,” as well as the 15th anniversary of Hells Headbangers which this festival celebrates:

We always wanted to do a Hells Headbangers label fest but never got around to it and weren’t even sure if Cleveland, Ohio was the right place for such a gathering. However, the ‘private’ cookout show at our warehouse last summer – AKA ‘Hells Headbash’ – removed all doubts, and with our 15th label anniversary just around the corner in July, we figured why not finally delve into the full-on fest?!

Continuing, he reveals that the demand for this second installment was so intense that a large venue was required for the mayhem to undoubtedly ensue:

Originally, we figured just a few hundred people would come out, so we booked a 500-occupancy venue, but after only a few of weeks of revealing a partial lineup, we found ourselves in dire need of a 2,000-occupancy venue! Praises to all who have supported us thus far – we’re eternally grateful!

Hells Heabangers was founded in 2002 in Cleveland, Ohio. The label’s very first release was a split album between Spawn of Satan and Bloodsick. From those humble beginnings, Hells Heabangers slowly yet surely began their dominance of the metal underground, furthering the careers of such cult favorites as Inquisition, Midnight, Nunslaughter, Havohej, Acid Witch, Deiphago, and Vomitor among others. With well over 500 releases to date, across a variety of formats – be they vinyl, CD, cassette, or even books – Hells Headbangers has been committed to the cause of vinyl from the very beginning, and the label has built a now-legendary reputation for creative ‘n’ collectible designs. However, the music comes first and foremost to the label, and Hells Headbangers has held an uncompromising position in unleashing only the darkest and most vile death metal, black metal, thrash, grind, and metalpunk as well as unearthing cult rarities from extreme metal’s past. On top of that, the label runs one of the most exhaustive and in-demand mail-order services in the metal scene. “When you need metal, go to hell…”