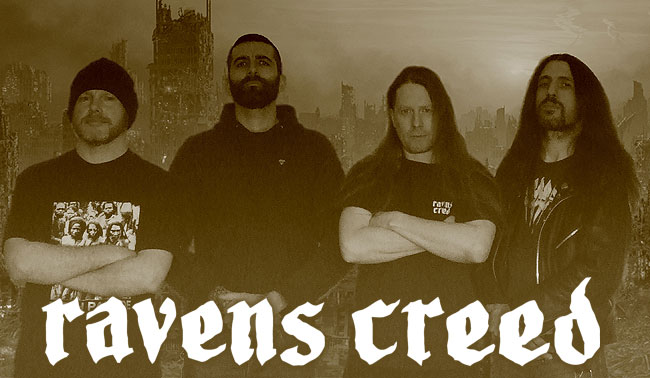 British Death Metal mongers RAVENS CREED have inked a deal with Xtreem Music for the release of their upcoming album which is currently being recorded at Tenko Studios in Nottingham and will be entitled “Ravens Krieg”.

RAVENS CREED was formed back in 2006 by Steve Watson (ex-Iron Monkey & Cerebral Fix) and Jay Graham (ex-Skyclad, Return to The Sabbat and Iommi) being joined by Frazer Craske (ex-Sabbat) and Ben Ward (Orange Goblin) who later left the band during some of the various line-up changed the band suffered, being nowadays completed by Al Osta (Cerebral Fix) & Rod Boston.

The discography of RAVENS CREED is compound by four EP’s and two albums, these two through Czech label Doomentia: “Albion Thunder” (’09) and “The Power” (’12) where the band has been developing their very own style of old fashioned Death Metal with a Crusty edge inspired by the sound of bands like MASTER, VENOM and HELLHAMMER.

There’s still no release date for “Ravens Krieg” as recordings and artwork haven’t been finished yet, but as soon as all is done, we’ll reveal both cover art, advance track and definite release date, which should happen during this summer.