Sweden has always been the envy of the Mettle Gods when it comes to Traditional and True Power Metal. As of late, highly praised powerhouses such as Dream Evil and Insania have left us in a lurch; especially after the break-up of both Zonata and Nostradameus. Our eagle-minded souls anxiously anticipate those metal hearts on fire who follow their sacred path. BloodBound are carrying this torch, and even though Oscar would not label his band as being Power Metal as such, HammerFall – who jumped ship to Napalm – continue to release strong material, that is always built to last.

I am grateful to promote The Storyteller who now feature the exceptional guitar talents of Cedrerick Forsberg from StormSpell Records’ own Rocka Rollas, Blazon Stone, Breitenhold, Pagan Altar, etc. In the last few years the scene has expanded with highly inspired young and alive acts including Sliptrick Records recording artist Veonity, who just unleashed their triumphant second effort – ‘Into The Void’. There are also dream chasers like Katana, Enforcer, Steelwing, and now Lancer who are garnering our attention.

This is the third release for the children of the second storm. This marks their debut for Nuclear Blast who have been successful promoting Sabaton, and over the top Lost Horizon imitators: Twilight Force. Signing Lancer is a move in the right direction. Many qualified Power Metal acts from around the globe are keeping the fires lit, with a reforged steely intent. Indiana Americans Zephaniah are working well with Divebomb, Canadian acts like Striker, Unleash The Archers, and Iron Kingdom have even toured the U.S.

Most bands borrow from the crowned masters who set the precedent like Helloween, Gamma Ray, Unisonic, Iron Savior, Avantasia, Edguy, Stratovarius, Freedom Call, Custard, Heaven’s Gate, Seventh Avenue, etc., and Lancer are no exception. In fact, lead vocalist Isak resonates and echoes that Mike Kiske and Tobias Sammett style. He still breaks new boundaries, and his range and pitch have drastically improved since their last effort.

The CD starts off with the ambiguous and average “Dead Raising Towers”, followed by the pretty Maidenish “Future Millennia”. On my first listen, I was rather dismissive of the whole album. I found it trite, and a bit silly. I have heard their other two efforts, since I have championed the band since 2012. I enjoyed ‘Second Storm’, but did not invest too much time in it. The lower production certainly disappointed me.  I was concerned that this third trial by fire would leave me savagely disgraced. Thankfully, after repeated listens, watching their videos, and reading the lyrics, I have altered my overview significantly.

The title track has the most impact. “Mastery” is a masterpiece, even if it sounds like vocalist Isak Stenvall is saying the word: “Masquerade”. “Iscariot” rings harmonious with the entertaining track “Mr. Starlight” from their (EP). The alchemical balance of “Follow Azrael” and the uncertain futuristic “World Unknown” are both infectious and fun like “Masters And Crowns” and “Behind The Walls” from their sophomore outing, while also evoking the presence of newer Scanner and the Heart of the Phoenix found in Victorius, or Hungary’s Wisdom.

The more epic “Victims Of The Nile” sees Isak paying homage to Timo Kotipelto. While “Widowmaker” reminds me of “The Exiled”, another great track from their debut with its “Joust” inspired cover.  The deadly sign of “Envy Of The Gods” flows quite well, even if it clearly their interpretation of “Twilight Of The Gods” from ‘Keys 1’. It is practically the same song!

The life and crimes of “The Wolf And The Kraken” digipak bonus track continues the very Maidenish “Aton” or “Between The Devil And The Deep” palate, but pales by comparison to that ‘Seventh Son’ meets ‘Powerslave’ suggestion.

I was so impressed with Lancer’s self-titled debut. Mastery is a much more mature, and better written album overall, even if it is plagiarizing from too many great artists who truly set the standard. This is not necessarily a bad thing, as I still find the melodies mellifluous and redolent of frivolity. Lancer, for future millennia please don’t go changing a thing! 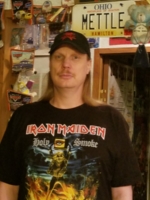