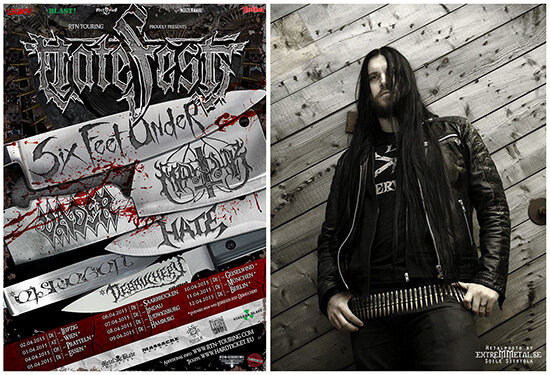 SIX FEET UNDER announces Victor Brandt on bass to step in for HATEFEST tour 2015 featuring Marduk and Vader among others!

April 2015 will see the return of the HATEFEST Tour. The unholy billing will be headlined by SIX FEET UNDER and includes also Marduk, Vader and Hate! Special guests on all weekend-dates will be Eisregen and Debauchery. Tickets for this exceptional Death/Black Metal tour are available at www.hardticket.eu.

SIX FEET UNDER have announced Victor Brandt will be stepping in for this run of dates on bass. Comments singer Chris Barnes:

“Thanks to all the fans for the great response to the upcoming new SFU release “Crypt of the Devil” and the first track “Open Coffin Orgy” thank you so much! We are currently getting ready for our upcoming tour with Vader and Marduk on the HateFest tour of Europe. It will be a cataclysmic event. Do not miss it. Also for this run of dates we want to let you know that stepping in for our bass player, Jeff Hughell, will be Victor Brandt from Entombed. Steve Marco and myself are very much looking forward to sharing the stage with Victor while Jeff and his wife Fazi welcome the birth of their first child! It’s gonna be a great year for SFU! Can’t wait to see you all soon!”

“I am very proud and happy to step in for my good friend and Warwick brother Jeff Hughell to play bass with the mighty Six Feet Under for their upcoming tour in Europe. We’re gonna have a blast! Be sure to check out this killer tour that also features Marduk, Vader and Hate! See you in the pit and/or the bar.”

SIX FEET UNDER, will release their eleventh studio recording this spring via Metal Blade Records. Titled “Crypt Of The Devil”, the ten track slab of audio violence was composed by vocalist Chris Barnes and Cannabis Corpse bassist/vocalist Phil “Landphil” Hall. While on tour with Cannabis Corpse in 2013, Barnes and Hall met and kept in touch. Barnes would later lend his vocals to a track on Cannabis Corpse’s “From Wisdom To Baked”. That same year, Hall and Barnes joined forces to pen brand new SIX FEET UNDER tracks. Barnes lauds Hall’s take on the SIX FEET UNDER style of death metal and stated that this material was, “where my wheelhouse is – it’s where I thrive vocally and lyrically.”

“Crypt Of The Devil” stands as a truly collaborative and cross-country effort from a selection of today’s finest metal minds, and the result is a refreshing SIX FEET UNDER experience. Or as refreshing as brutal, visceral death metal can be, anyway.